Dan and Kailey are joined by Sarah Reese, dir­ect­or of the Alliance Française French Film Festival, to talk about this year’s event which opened in Auckland on 19 February, and RNZ Afternoons review­er Sarah McMullan and Kaarin Macaulay step up to dis­cuss the hot­test tick­et in town, Fifty Shades of Grey.

END_OF_DOCUMENT_TOKEN_TO_BE_REPLACED

After what seems like weeks of hol­i­days, Summer Noelles and Matinée Idles, Radio New Zealand National is pretty much back to nor­mal which means the return of my fort­nightly movie reviews. Let this be a little place­hold­er now that Rancho Notorious has become a fort­nightly release.

Plus, New Zealand International Film Festival dir­ect­or Bill Gosden and I talk­ing to Lynn earli­er this sum­mer about the future of New Zealand film under the new film com­mis­sion régime of David Gibson.

Dan and Kailey are joined by Steve Austin on the line from Auckland to talk about “Straight to Video”, his blog review­ing the increas­ing num­ber of films that don’t get a the­at­ric­al release in New Zealand (includ­ing James Gray’s The Immigrant). He sticks around to help the team review Clint Eastwood’s American Sniper which stars Bradley Cooper as an all-American hero trau­mat­ised by the Iraq war.

Plus, Kailey inter­views Tess and Jamie from the Circa Theatre pro­duc­tion of Seed.

END_OF_DOCUMENT_TOKEN_TO_BE_REPLACED

In the last (non-Rancho) post I made a com­mit­ment to get back in to reg­u­lar review­ing and to end my year-long sab­bat­ic­al. (For the reas­ons behind the hiatus, it is recom­men­ded that you have a quick read. Go on, I’ll wait here.) It has come as a bit of a sur­prise to me that I’ve actu­ally seen as much as I have over the last few months. It didn’t feel like it but — thanks to Radio New Zealand, FishHead and Rancho Notorious — fully 18 of the films cur­rently screen­ing around Wellington are films I can actu­ally have an opin­ion on.

Anyway, here goes, and I might as well start with the old­est first. Which, as it turns out, is also a con­tender for the worst film in this post. 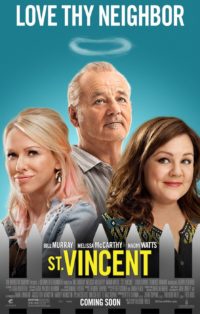 I’ve nev­er man­aged to hide my dis­dain for Little Miss Sunshine, a film which is beloved by many and held up as an example of qual­ity screen­writ­ing to which we all should aspire. It is, in fact, garbage. A col­lec­tion of tics mas­quer­ad­ing as char­ac­ters stuck in a contrived-cute situ­ation in which life les­sons will be learned too eas­ily and happy end­ings will be unearned. Theodore Melfi’s debut fea­ture St. Vincent also falls into all these traps only deep­er. It also relies so heav­ily on the great Bill Murray that it man­ages to even bring him into disrepute.

END_OF_DOCUMENT_TOKEN_TO_BE_REPLACED

Guests Marie O’Sullivan (@reesiepie) and Mike Dickison (@adzebill) join Dan and Kailey to talk about the sum­mer cinema releases so far, includ­ing Into the Woods, Birdman and The Imitation Game.