By Dan Cinema and Screenwriting

I’ve just got­ten around to listen­ing to the Creative Screenwriting Q&A between Jeff Goldsmith and Rachel Getting Married writer Jenny Lumet and pro­du­cer Neda Armian. It’s an excel­lent con­ver­sa­tion, the two women are frank and hon­est and incis­ive, and there are some lovely stor­ies about the mak­ing of one of my favour­ite films of the year.

If you don’t have time to get through to the whole thing ff through to about 41:30 for a great story that inspired the com­pet­it­ive dish­wash­ing scene in the film. 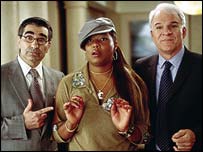 Steve Martin (right) uses the 90 per cent of his brain that isn’t required for act­ing in Bringing Down the House to write Don Cheadle’s Traitor.

Actually, not so much second thoughts as some­thing inter­est­ing dis­covered after the the review went to print.

In the blog roll to the right you will find a link to the Creative Screenwriting pod­cast, which is nev­er less than inter­est­ing des­pite host Jeff Goldsmith’s some­times annoy­ing abil­ity to miss the inter­est­ing follow-up question.

Anyway, I make a point of not listen­ing to a pod­cast until after I’ve seen and reviewed a par­tic­u­lar film – I try and watch everything unme­di­ated by any­thing more than the trail­er – but that some­times means I miss a gem of con­text that might illu­min­ate (or add value in some oth­er way).

Last week I was listen­ing to writer-director Jeffrey Nachmanoff talk about the Don Cheadle war-on-terror thrill­er Traitor and he out­lined how the film got its start: an idea from comedi­an Steve Martin that he had while work­ing on the Queen Latifah “com­edy” Bringing Down the House. Evidently, he had the idea, wrote a treat­ment, sold it to Disney and then got the heck out of the way.

It obvi­ously went through a few changes since then (as these things always do) but that whole “ter­ror­ists want to blow up 50 buses, tricked into all get­ting on the same bus” thing? All Steve.