It isn’t online at the Cap Times, so I thought I would archive my inter­view with The Visitor star, Richard Jenkins here. I spoke with Richard by phone last Sunday morning. 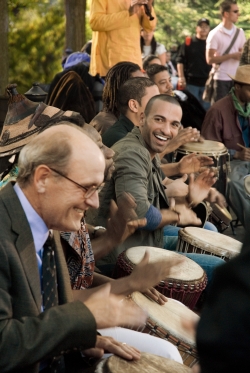 “My drum­ming sucks” – Richard Jenkins in The Visitor

Best known to New Zealand audi­ences as the deceased pat­ri­arch of the Fisher fam­ily in television’s “Six Feet Under”, Richard Jenkins has had a steady career in movies over the last 25 years, often in unsung sup­port­ing roles, but this year he has really left a mark.

Speaking to the Capital Times from his home in Rhode Island, Jenkins gave thanks to Thomas McCarthy, cre­at­or of 2004’s sleep­er hit The Station Agent, for hav­ing faith in him des­pite his lack of mar­quee pres­ence. “He asked me to read the script and I hadn’t read any­thing I liked more. But I told him, nobody’s going to give you the money with me in it!” But McCarthy per­severed, even when one exec­ut­ive pro­du­cer sug­ges­ted just weeks before shoot­ing that Morgan Freeman might be a more com­mer­cial choice.

2008 has been a great year for Jenkins.  In the sopho­mor­ic buddy com­edy Step Brothers he got to impro­vise scenes about dino­saurs with Will Ferrell and John C. Reilly; he was reunited with The Coen Brothers for Burn After Reading (in a part that was writ­ten for him); and in the sens­it­ive indie he shines as a wid­owed aca­dem­ic brought back from a bound­less depres­sion by a chance New York con­nec­tion with two illeg­al immigrants.

But car­ry­ing a film on his shoulders was a new exper­i­ence.  “I always wondered what it would be like, you know? Could I do it? But most of all, I didn’t want to let Tom down.” He needn’t have wor­ried, as his per­form­ance anchors a typ­ic­ally humane McCarthy film about strangers thrown togeth­er and learn­ing to appre­ci­ate and then love each other.

Jenkins con­tin­ues to live in tiny Rhode Island where he moved after suc­cess­fully audi­tion­ing for the Trinity Rep theatre com­pany in Providence in 1970. He hap­pily per­formed and dir­ec­ted there for 14 years, even spend­ing four years as act­ing Artistic Director just as his film career was tak­ing off.

The movie work has been so reg­u­lar he hasn’t been on a stage since 1985 but he nev­er anti­cip­ated a film career. ”I’d always loved film but frankly, it was easi­er to go the the moon,” he laughs. “A career is some­thing you look back on rather than some­thing you plan”.

Now he says he enjoys watch­ing theatre more than he ever did (when he was act­ing in it) and tries to catch whatever he can, wherever he may be filming.

At the rate that Jenkins makes films (there are anoth­er four in the can for release next year), the law of aver­ages sug­gests he will be shoot­ing in Wellington before too long and he knows the tal­ent we have to offer, describ­ing work­ing with Niki (Whale Rider) Caro on North Country as his best movie-making exper­i­ence ever.