After an unex­pec­ted three week break, Kailey and Dan return to talk about the movies Insurgent and Cinderella, Dan’s recent trip to Buenos Aires and the new Pukeko Pictures/ITV co-production reima­gin­ing of the legendary TV series Thunderbirds (fea­tur­ing a Q&A with Sir Richard Taylor, dir­ect­or David Scott and Pukeko CEO Andrew Smith). To see some behind-the-scenes pics from the Thunderbirds Are Go set check out the show notes below.

END_OF_DOCUMENT_TOKEN_TO_BE_REPLACED

By Dan Asides and TV

Rip came in for the first time, and his agent said he wouldn’t read. Weeks later it was just him and me in a room with no one else, and I said to Rip, “Could we read half of this togeth­er?” And he said, “I don’t want to read.” I said, “That’s totally fine,” and I pushed it to the side of the table. We talked for less than anoth­er minute, and he reached over and took the page, and he starts the scene. It’s like try­ing to describe a good date to a friend the next day. I had to say to HBO and every­body else, “Honestly, this is the best sex I have had.”

“The Larry Sanders Show” is finally get­ting the full DVD treat­ment (I am a happy own­er of Season One). And, oh man, I’ve just dis­covered that the com­plete “It’s Gary Shandling’s Show” is on Region 1 DVD. Must. Have.

And on the sub­ject of “It’s Garry Shandling’s Show”, here’s the fam­ous theme tune:

And while we’re on the sub­ject of Garry, please read this exten­ded inter­view with the man at GQ. That is all.

“The dir­ec­tion I’m going in is even­tu­ally you won’t know if it’s a joke or not,” he explains, describ­ing his new act, which he has been quietly test­ing in clubs where his name nev­er appears on the mar­quee. “What I want to hap­pen is that I talk for an hour and the audi­ence does­n’t real­ize it is funny until they’re driv­ing home.”

By Dan Asides, Cinema and TV

Jon Hamm (“Mad Men”) describes the life of a not-very-successful Hollywood act­or in The Guardian:

And there’s this hideous thing they make you do when you go up for a tele­vi­sion show: they make you sign a con­tract before you walk into the final audi­tion. The last thing they want is for you to have every­one fall in love with you, and then you not have a deal in place. So you sign this thing – and I had no money; I was broke. You’re star­ing at the five-figure pay cheque you’ll get… if… If! A crazy amount of money for someone who has none. So I was think­ing: I’ll pay my loans off and do this and that and maybe get my car fixed… and by that time they’re call­ing you in, you’re like: ‘Shit! I have to do the scene! What the fuck are the lines?’ I would get hung up on that stuff and be an utter fail­ure in the room.”

Hamm dis­plays an admir­able amount of self-awareness in this inter­view, pro­mot­ing his new fea­ture film The Town (dir­ec­ted by Ben Affleck). Part of Hamm’s suc­cess as Don Draper is the tiny amount of “I can­’t quite believe this is hap­pen­ing to me” he man­ages to project.

Hat-tip to The Story Department.

“the aurora that is SHATNER”

By Dan Asides, Cinema and TV

Resistance is futile, of course. You aren’t in Shatner’s pres­ence ten minutes before he reverse-engineers your emo­tion­al state; first, you adopt those con­ver­sa­tion­al rhythms of his—everywhere, the jelly!—and then, by God, you start to feel the enthu­si­asm of your words, an enthu­si­asm inev­it­ably heightened by your know­ledge that this is WILLIAM TIBERIUS FUCKING SHATNER! you are deal­ing with, the most meta, the most absurd, human being in Western Civilization, and you fall in love with that meta-absurdity, the bon­anza of impun­ity and laughs it generates.

When I did The Immortals recently, the dir­ect­or and I had three short­cuts for line read­ings: Clarkson, Blessed and Shatner.

May I dir­ect your atten­tion to the new series of “The Gravy”, a top notch art doc­u­ment­ary series from Wellington’s Sticky Pictures. There’s a heap­in’ help­in’ of inter­est­ing con­tent lined up includ­ing a whole epis­ode on theatre-maker Jo Randerson and her show Good Night – The End (Downstage, Sep 2009). That’s S04E03, folks. Also of note, Wellington artist and design­er Sarah Maxey fea­tures in Episode Four.

The series is broad­cast on TVNZ7 (Freeview) from this Saturday, 5 December but the first epis­ode is now avail­able at TVNZ On Demand if you just can­’t wait: Warren Maxwell looks at art in Taranaki. 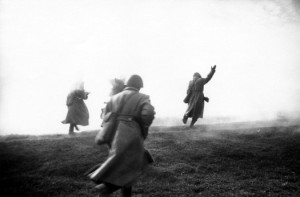