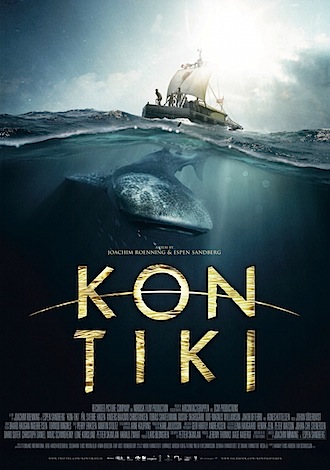 Speaking as someone whose taste for adven­ture does­n’t stretch much fur­ther than going to the dairy in the rain, the reck­less self-endangerment rep­res­en­ted by Joachim Rønning and Espen Sandberg’s Kon-Tiki was a genu­ine eye-opener. The bones of the story are well-known enough to any­one who built balsa mod­els of Heyerdahl’s raft at primary school in the 1970s but bear repeat­ing here. 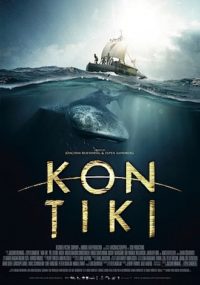 While research­ing nat­ive Tahitians in the late 1940s, Norwegian ethno-explorer Thor Heyerdahl pos­ited a the­ory that the islands of Polynesia had ori­gin­ally been settled by sail­ors from South America (actu­ally, bear­ing in mind the tech­no­logy of the time they would have been more like the drift­ers from South America, but hey). Unable to per­suade any­one in the sci­entif­ic com­munity, he was forced to exper­i­ment on him­self. He went to Peru, built a raft, crewed it with oth­er north­ern European adven­tur­ers and set off to find Polynesia.

With little or no exper­i­ence, train­ing or even aptitude, it was a giant leap of faith – Thor’s faith. Unable to steer, threatened by sharks and – for most of the time – without radio con­tact, it was a com­pletely potty idea but an idea that trans­formed our know­ledge of human devel­op­ment and changed history.

In Rønning and Sandberg’s film, Heyerdahl comes across as an obsess­ive and extremely dif­fi­cult man, but the way they por­tray the adven­ture it becomes clear that there was really no oth­er way. Heyerdahl’s faith was­n’t a mil­lion miles away from the totally blind faith of the first explorers who set out from Peru all those cen­tur­ies ago. That obses­sion is also shared by the film­makers who insisted on using a rep­lica ocean-going raft (incid­ent­ally named Tangaroa) built by Heyerdahl’s grand­son, and then chose to shoot on the open sea rather than in a tank.

END_OF_DOCUMENT_TOKEN_TO_BE_REPLACED

The former East Germany is the set­ting for Christian Petzold’s Barbara; Tom Cruise tempts fate with the dar­ingly titled Oblivion; zom­bies are brought back to life by love in Warm Bodies and we pre­view our i/v with Espen Sandberg, co-director of Kon-Tiki.