Telluride Diary part one: The decision

The first draft of history… 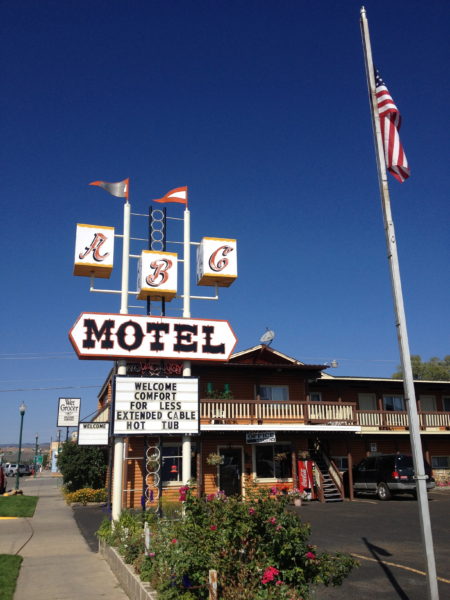 The ABC Motel in Gunnison, Colorado. Venue for Night Two of this odys­sey. Who could resist?

For a few years I’ve been har­bour­ing ideas for a num­ber of excit­ing pro­jects. These are the sort of pie-in-the-sky ideas that wer­en’t pos­sible dur­ing the dark days of 2009 and 2010 when work was thin on the ground and money was thin­ner, but they kept me going and I was hope­ful that one day I might be able to put one or two of them into action.

This year the work situ­ation turned has turned around so com­pletely that the excuses I’d been mak­ing for not march­ing on with these ideas simply could­n’t hold up. I finally had the money to put where my mouth was. I’ve had an idea for a while to write a travel book about world film fest­ivals, a guide to their dif­fer­ing char­ac­ters and mis­sions and what they are like to attend. This was really an excuse – and a struc­ture – to do some trav­el­ling as my prot­est­ant work eth­ic does­n’t allow me to simply travel for fun. There always has to be an end in mind. Wellington would obvi­ously be a chapter – I know it so well – but what should be chapter two?

A chance meet­ing with Prof Richie Meyer while he was in Wellington earli­er this year intro­duced me to the Telluride Film Festival – he raved about it, quite frankly – and a quick look at the dates demon­strated that it was pos­sible. The clinch­er was when he told me that the pro­gramme for Telluride is nev­er announced in advance – you have to go on faith. And you have to demon­strate a lot of faith, too, as Telluride is extremely dif­fi­cult to get to, expens­ive to stay at and expens­ive to attend.

But the prox­im­ity to Hollywood (two hours by jet) – and the close­ness to the Toronto Festival – means that films often get launched there and the attend­ance of film­makers and stars is pretty much man­dat­ory. So, it’s a great oppor­tun­ity to get mater­i­al for Cinematica as well as research the book. Impossible to res­ist. And when I real­ised I could tag on six days in NYC plus a trip back to Blighty to see old school friends and fam­ily for the first time since 1999, res­ist­ance was futile.

Since the decision was made in early May, it has been a flurry of sav­ing, work­ing three jobs, schedul­ing, buy­ing tick­ets, arran­ging accom­mod­a­tion, fol­low­ing up leads – mad­ness! But here I am, in Gunnison, Colorado, one day away from Telluride, three days away from the open­ing of the fest­iv­al. I have media accred­it­a­tion, a fest­iv­al pass, two record­ing devices and some bright red shoes that are appar­ently quite the con­ver­sa­tion starter. Bring it on.

Thanks at this early stage go to Lawrence Green (who provided much-needed encour­age­ment at a time when I was waver­ing), pro­fes­sion­al film fest­iv­al work­er Sibilla Paparatti (for con­nec­tions), Miriam Ross (for encour­age­ment), Ant Timpson and V 48 Hours (for indir­ect fund­ing) and RNZ and the Capital Times for help­ing me secure the media accreditation.