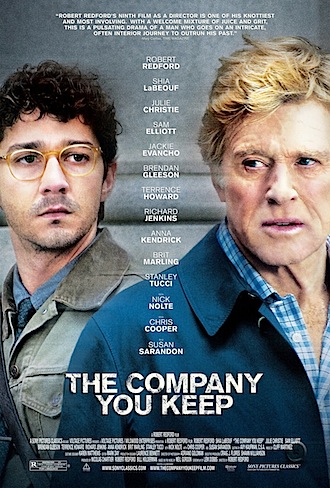 It’s easy to laugh at age­ing movie stars. Crumbs, when they make films like The Expendables they act­ively encour­age us to make jokes about creak­ing joints and dicky hips. But let us pause for a moment and salute the longev­ity of one of the greatest movie stars there ever was, someone who was head­lining box office smash hits when Arnold was still just pump­ing iron and Bruce was still at High School.

Robert Redford – the “Sundance Kid” – is 76 years old and in his new film, The Company You Keep, he does quite a bit of run­ning around even though you can see he has the slightly uncer­tain gait of someone whose bal­ance isn’t what it was. He rations out that mil­lion dol­lar smile pretty care­fully too, as this is anoth­er of his ser­i­ous politically-aware dra­mas – couched in the form of a thriller.