By Dan Travel and TV

So, here I am sit­ting in the deser­ted café of the Antarctic Centre at Christchurch Airport, wait­ing to pick up Marty R for the start of his birth­day trip.

We’ve hired a sporty sil­ver Mercedes so we can drive him back to his gaff in Dunedin and then hoon around Otago pre­tend­ing to be rock stars. I have my sunglasses at the ready and, fin­gers crossed, the rain will hold off long enough to have some pho­tos taken with the top down.

So far, I haven’t had a chance to exer­cise the key prop­er­ties of the SLK Kompressor as all the driv­ing so far has been in gentle Christchurch traffic but we’ll soon be on the road. 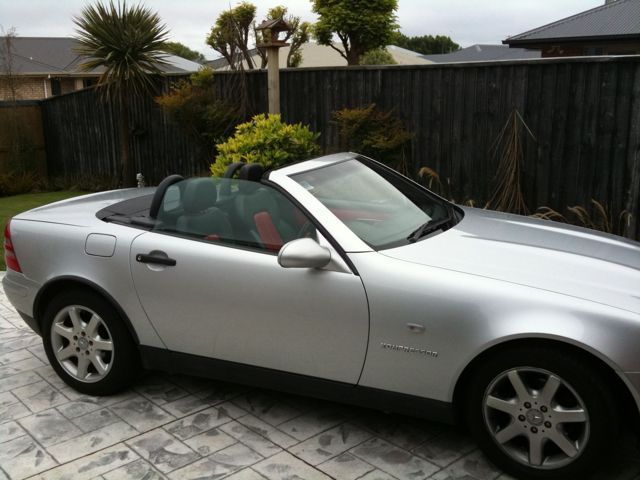 Once again I stop by simply to apo­lo­gise for the lack of updates and for the reviews arriv­ing so late as to be all but use­less to a Wellington cinema-goer. What can I say? Life’s been a bitch. But things are look­ing up. Today I fin­ished read­ing “Sag Harbor” by Colson Whitehead at 2am, just in time to review it for Nine to Noon later this morn­ing. In between I man­aged 650 words for the Capital Times on Gomorrah, The Proposal and A Bunch of Amateurs.

Things should be get­ting easi­er over the next few weeks, but Film Festival is almost upon us and I have a stack of pre­view DVDs to get through. By the week­end I should have got all the out­stand­ing reviews up, and the “now show­ing” to your right will make some sense too. I’m even threat­en­ing to update WordPress to 2.8 and the blog theme too.

Tonight, though, I intend to have some din­ner out of the microwave, put the feet up on the couch and watch at least one stored epis­ode of Top Gear so it feels like a night off.

In the absence of a post of any sub­stance in the last fort­night, or so, I thought I would point you towards some­thing free-of-charge (actu­ally, you already paid via the meth­od we use to keep NZ On Air alive): the John Clarke/Sam Neill inter­view on Kim Hill’s Saturday morn­ing pro­gramme from Saturday 8 April. Apparently, due to the influ­ence of tem­por­ary pro­du­cer Mark Cubey, SatMng is now avail­able for podcast.

Describing it as a Podcast is a stretch, how­ever, as when you down­load the mp3 files (or sub­scribe via the rss) feed the files turn up with titles like “sat-4436F0EE-032” which is not help­ful if you want to play these pieces in the order in which they were transmitted.

But, in total, I have to applaud this entire pro­ject. In my life (I have no lifestyle) time-shifting is essen­tial or all your good work is for nought. The only piece of media (apart from All Blacks and West Ham games) that I insist on watch­ing live is Top Gear (on Prime at 7.30pm on Sundays) which enter­tains me bet­ter than any tele­vi­sion since The Magic Roundabout when I was a young­ster. Don’t start me on Sunday’s Bugatti episode…

So, the concept that great radio (or tele­vi­sion when they get around to it) is avail­able for me to listen to at any time of the day or night makes me very happy.

A couple of years ago I went to a great deal of trouble to try and record Charlie Gillett’s weekly “Sound of the City” pro­gramme off BBC Radio London’s realMedia feed so that I could listen to it at work (with all the inter­rup­tions it might take a whole day). But I had to cheat on the BBC deal and pay for some soft­ware that would let me record the show. I’ve been mean­ing to try and auto­mate the pro­cess so I could wake up with Charlie Gillett’s Saturday night pro­gramme in iTunes on my Sunday but I have been a bit distracted.

But, if any­one thought for a moment that listen­ing to radio (vir­tu­ally or real) hampered music sales I can point to Charlie Gillett and this file: the first track off Rufus Wainwright’s album Want One, of which I would not have heard unless I had been chan­el­ling Charlie. And it cost me NZ$34.99 and I regret not a cent of it.