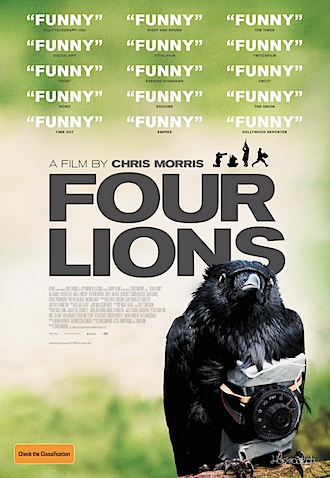 Review: Four Lions, Life as We Know It and Farewell 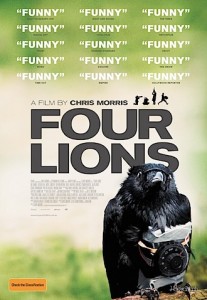 Somebody once said that com­edy is just tragedy plus time and Four Lions, a wicked, bit­ter and hil­ari­ous new com­edy by Chris Morris, tests that max­im to break­ing point (and for some of you, bey­ond it).

Back in the 90s, Morris was respons­ible for “Brass Eye”, a mock cur­rent affairs series that conned gull­ible celebrit­ies and politi­cians into (for example) appear­ing in advert­ise­ments warn­ing the nation against the new super drug ‘Cake’. Fearless and right­eous in equal meas­ure, he has made his first fea­ture film and it dares to try and make us laugh at the first world’s cur­rent bogey­man, Islamo-terrorism, spe­cific­ally the homegrown kind which led to the 2005 London bus and tube bombings.

In Sheffield, South Yorkshire, a group of wildly enthu­si­ast­ic but incom­pet­ent jihadists (played superbly by Riz Ahmed, Kayvan Novak, Arsher Ali, Adeel Akhtar and Nigel Lindsay) would be mak­ing a stand if only they could stop bick­er­ing. A trip to a Pakistani train­ing camp, bomb mak­ing classes, farewell videos and a trip to the London Marathon are all dis­asters but Four Lions is only 98% farce – there’s some heart in there too.

Four Lions is pretty much indefens­ible in print but in a dark cinema you can let your­self go and enjoy some of the finest absurd com­edy moments of the cen­tury so far. 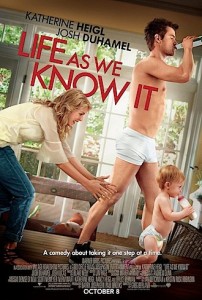 I’m giv­en to under­stand that the “ham” in Josh Duhamel is silent. After watch­ing his new “com­edy” Life as We Know It, I wish that the ham in his act­ing was silent too. Duhamel and the ghastly Katherine Heigl play a mis­matched pair who are giv­en cus­tody of a baby when the par­ents are killed in a car acci­dent. They hate each oth­er and aren’t pre­pared for par­ent­hood but grow to love each oth­er and become a family.

Life as We Know It is a revolt­ing ugly con­triv­ance, Heigl plays her usu­al insuf­fer­able con­trol freak and plenty of clichés are rolled out includ­ing the last minute run through an air­port to save a rela­tion­ship. Don’t. Bother. 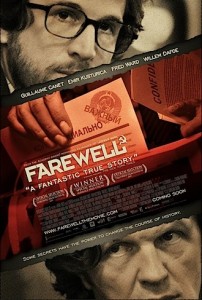 “Farewell” was the code name for a top level Western source inside the Soviet secur­ity machine. He fed enough mater­i­al to the French (and even­tu­ally the Americans) to tilt the bal­ance of power decis­ively in Reagan’s favour and bring the Cold War to an early end. At least that’s the thes­is of the French-Russian thrill­er Farewell which suc­cess­fully recre­ates the para­noid psy­cho­logy of the times and fea­tures an excel­lent per­form­ance from Emir Kusturica, bet­ter known as a dir­ect­or of films like Black Cat, White Cat and When Father Was Away on Business. If you look closely enough you will also see former tv detect­ive Hutch (David Soul) as a White House spook.

Printed in Wellington’s Capital Times on Wednesday 27 October, 2010 (plus the Buried and The Town reviews held over from last week).