Firstly, I should add a vital – totally Telluride – detail to yes­ter­day’s post. By choos­ing to watch Rust & Bone and the Marion Cotillard Tribute I missed the first indoor screen­ing of Hyde Park on Hudson and there­fore a rare live appear­ance by Bill Murray at the Q&A. Regret is an emo­tion reserved for those who only look back­wards but – damn! 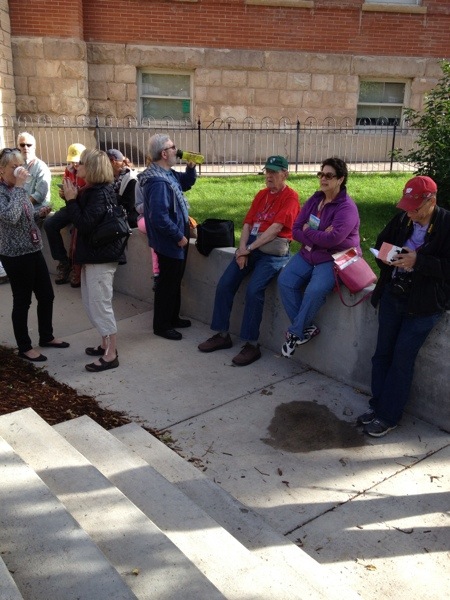 Legend Leonard Maltin wait­ing to gain entry to At Any Cost.

Back to the show. Sunday was always likely to be a very full day and – with my new found con­fid­ence in the “sys­tem” I was determ­ined to take full advant­age. I once begged the New Zealand Film Festival to let me watch a screen­er of Ramin Bahrani’s Man Push Cart, even though they had chosen not to pro­gramme it because I loved the idea so much and because Roger Ebert has been cham­pi­on­ing the tal­en­ted young dir­ect­or for years. In fact, they have only screened one of his three films to date: Goodbye Solo in 2009.

Seeing that his first major pro­duc­tion, At Any Price, was one of the head­liners I was happy to get to the Galaxy and queue for an hour for a tick­et to the 9.30am première. Director Bahrani intro­duced star Dennis Quaid and both com­pli­men­ted each oth­er ful­somely. Bahrani men­tioned how happy he was to have a legend like Quaid in the lead and felt like all he had to do with such an exper­i­enced act­or was to roll the cam­era. And there, ladies and gents is the root of the prob­lem with his film.

At Any Price is about an Iowa farm­er and seed mer­chant who has been re-using GM seeds – and selling them – and is in danger of los­ing everything. Meanwhile, one son has fled to South America and is nowhere to be seen and the oth­er (a cred­ible Zac Efron) would rather fol­low his NASCAR dream rather than takeover the fam­ily busi­ness. This is a film that has a lot on its mind and insists on shar­ing it all. It gets bet­ter when the char­ac­ters don’t feel the need to verb­al­ise everything but the dra­mat­ic final third tries to cash a cheque that the first two acts haven’t even written.

Disappointed, I chose not to stay for the Q&A and headed for the Palm, passing Quaid out­side the theatre on the way out. For some reas­on, my best tweet of the week­end (“AT ANY PRICE: Why didn’t Quaid’s char­ac­ter think of build­ing a base­ball dia­mond? It’s worked before. #tff39 #tel­lur­ide”) got no response.

At the Palm, I saw the new Michael Winterbottom – Everyday – an exper­i­ment as all of Winterbottom’s best films are. About five years ago he was won­der­ing if there was a bet­ter, truer, way to show the pas­sage of time on screen and came up with the wheeze of shoot­ing a film in bits over five years, so the audi­ence can watch the subtle changes in the adult act­ors and the not-so-subtle changes in the children.

The film is about a fam­ily cop­ing while their fath­er (John Simm) is in pris­on for an unspe­cified crime. The moth­er, played by Winterbottom reg­u­lar Shirley Henderson, wrangles her four kids through pris­on vis­its, first days at school, emo­tion­al troubles, etc. as well as try­ing to keep her own life in track. This pushed quite a few but­tons for me and I’m not ashamed to say I was dab­bing away at tears more than once. Looking for­ward to see­ing it get a loc­al release – wheth­er it will or not, who knows. 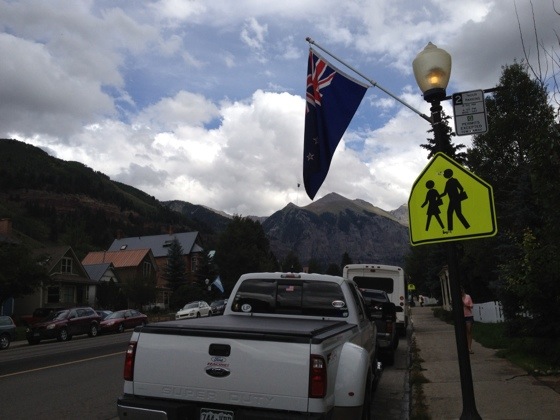 A strangely famil­i­ar flag on the streets of Telluride.

After Everyday, I had time to get a copy of Zona signed by author and Guest Director Geoff Dyer before head­ing back to the Galaxy for the 70mm screen­ing of Baraka that he had selec­ted. (incid­ent­ally, anoth­er Telluride story – I was stand­ing behind Midnight’s Children dir­ect­or Deepa Mehta in the book sign­ing queue.)

Baraka star­ted a little late for tech­nic­al reas­ons (“rec­ti­fier cra­pout” we were told, and fix­ing one of those in 30 minutes is a stu­pendous achieve­ment) but we were treated to a lovely intro­duc­tion from Dyer and a film that has lost none of its power to hyp­not­ise and enchant in the 20 years since it was first released. 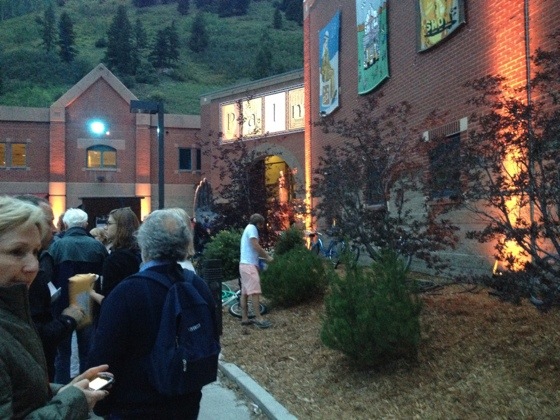 Can you tell that I pretty much stopped tak­ing pho­to­graphs after Day Two?

Another brisk walk later and I was back at the Palm for the Mads Mikkelsen Tribute. Having already seen The Hunt at NZFF, I found myself a seat on the side so I could make a quick get­away once the open­ing cred­its star­ted, after the present­a­tion and Q&A. I found myself sit­ting next to a dis­tin­guished older gen­tle­man (with a walk­ing stick) and made a wise­crack about my desire to escape before the fea­ture. Oh really, he said, why?

So, I told him that I had­n’t bought the premise of the pic­ture, had­n’t been able to believe that a mod­ern male kinder­garten teach­er would­n’t already be aware of how to pro­tect him­self against accus­a­tions of abuse, would­n’t allow him­self to be abused in that way.

He smiled at me and said, I edited the film.

Oh, your work was abso­lutely out­stand­ing, I back­tracked. But it could­n’t have been if you did­n’t believe in our story, he replied. What fol­lowed was a stim­u­lat­ing and even-handed con­ver­sa­tion with Janus Billeskov Jansen (who edited Pelle the Conqueror and Smilla’s Sense of Snow) about The Hunt, Peter Ellis, Joe Paterno and Jerry Sandusky, and the Catholic Church, end­ing with the ques­tion: as child sexu­al abuse is still so per­vas­ive, is it accept­able that occa­sion­ally false accus­a­tions will occur if we are to aggress­ively pur­sue the the genu­ine perpetrators?

It was an excel­lent fif­teen minutes con­ver­sa­tion – fol­lowed by anoth­er well-handled Scott Foundas Q&A – and we then both left the ven­ue before the fea­ture star­ted. Although his excuse for leav­ing was prob­ably bet­ter than mine.

After a quick bite to eat, it was back to the Sheridan Opera House for The Iceman, a mob thrill­er based on a true story and star­ring the almost impossibly intense Michael Shannon. Director Ariel Vroman apo­lo­gised that Shannon was­n’t present (rehears­ing a Broadway play) but did intro­duce co-star Ray Liotta who waved but said nothing.

This was the only film I saw in the pro­gramme that I could­n’t believe was actu­ally a Telluride film. Adding noth­ing to the genre, noth­ing to the careers of any of the cast, I came away think­ing that no film with fake facial hair that bad should be con­sidered for any awards any­where. Goodfellas-lite. If I was a NZ dis­trib­ut­or this would be straight-to-DVD at best. Watch me get proved wrong…

By the way, here’s a free idea Hollywood: one day someone is going to make one of these nos­tal­gic mob tales from the point of view of the wife, rather than simply trot­ting out the same old clichés.