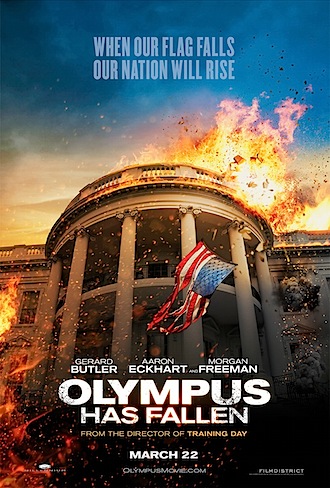 Luckily for audiences, Fuqua’s no fool so the execution occasionally results in an elevated heart rate, particularly the well-staged opening attack from both ground, air and inside the White House. It’s quite charming that his film still thinks that the U.S. President actually has any real power when recent events have shown the exact opposite and the leadership’s willingness to trade 50 million South Korean lives for one middle-aged white man in a suit is kind of adorable, don’t you think?

I’ve expressed my distaste for Mr. Butler several times before in these pages and he does nothing here that might win me over. Oh, how I yearned for a hero with a self-deprecating sense of humour instead of a constipated look of unshaven discomfort. In fact, a sense of humour is in pretty short supply throughout Olympus Has Fallen, starting with the outrageously pompous title.

My problems with Gerard Butler are largely — I’ve been told — a matter of taste. In fact, just this weekend I was told that he was quite an attractive man (as movie stars go) and, presumably, there are enough people who share that opinion for him still to be starring in expensive movies. It’s an awkward concept to raise in a film review, taste. We’re supposed to be above all that — empirically objective, sitting in even-handed judgement so that our stars, tomatoes or thumbs can guide you all to cinematic enlightenment. Which would be nice, but really we’re just arguing for our taste and — hopefully — my taste meshes enough with yours that you continue to find this service useful.

Taste was also on my mind late on Saturday night as a settled in to a perishingly cold Embassy Theatre for Evil Dead, a film that I would not normally choose but which I was forced to endure to a) serve you, dear reader, and b) keep up my record of seeing everything for the last six years.

Unlike many genuine movie lovers, I’m not a big fan of being frightened in a cinema — or disgusted if it comes to that — but I can recognise when a film delivers on its own intentions and when the craft on display is palpably first-rate. In this reboot of the famous low budget trilogy that launched the careers of Spider-Man’s Sam Raimi and Xena’s Rob Tapert, four young people have gathered at a remote cabin in the woods to perform an intervention. Mia (Jane Levy) is determined to finally kick her habit and her friends (Lou Taylor Pucci and Jessica Lucas) and brother David (Shiloh Fernandez) are their to support her through withdrawal.

In a colossally bad decision, Mr. Pucci’s character Eric reads aloud an incantation from the spookiest book of occult images and spells imaginable — despite the clear warning “DO NOT READ” written in blood on the opposite page. These morons deserve everythng they get, don’t they? A demon is raised that takes possession of poor Mia and then it’s all on for young and old as a long rainy night results delivers barrels of fake blood and some very effective prosthetics. Like I say, not really my bag but respectable and effective.

A late entry in the contest for school holiday attention is the lighthearted and lightweight Escape from Planet Earth about a pair of aliens trapped in Area 51 by a power-crazed General with the voice of William Shatner. These blue beings are benign — if a little naive — but their co-incarceratees are reduced to tired ethnic clichés as a way to get their laughs. Aimed at roughly the same age group as Fox’s The Croods but about half as successfully, Escape is likely to prove useful in week two of the holidays if the weather doesn’t play ball.