END_OF_DOCUMENT_TOKEN_TO_BE_REPLACED

Review: Dallas Buyers Club and Blue Is the Warmest Colour 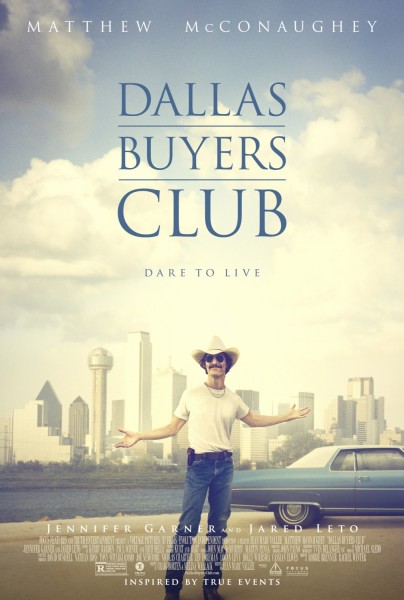 When we meet Texan man’s man Ron Woodroof (Matthew McConaughey) at the beginning of Dallas Buyers Club he is a mess – a shocking, disreputable, selfish combination of drunk, thief, womaniser and gambler. He doesn’t look so hot either. Soon after that, during a routine hospital check – routine for Ron is the equivalent of an emergency for the rest of us – we discover why: he has AIDS and, because it is only 1985 he has very little time left to live.

But because the word “ornery” was invented in Texas, Woodroof has no intention of succumbing quietly, even stealing the experimental drug AZT from the hospital stores until he discovers that it is even more toxic than the disease he is afflicted by. A last chance stoned drive to Mexico introduces him to a struck-off doctor (Griffin Dunne) and a cocktail of drugs that could extend his life – and millions of others – if only he could get at them.

END_OF_DOCUMENT_TOKEN_TO_BE_REPLACED

Dan reports in from Telluride; Richard Linklater reunites with Matthew McConaughey and Jack Black in BERNIE; Sly Stallone reunites with Jason Statham and Dolph Lundgren in THE EXPENDABLES 2 and Wes Anderson reunites with Bill Murray in MOONRISE KINGDOM.

Review: The Bourne Legacy, Bernie, Cheerful Weather for the Wedding, I Wish and Iron Sky

In The Bourne Legacy, Matt Damon’s amnesiac super-soldier Jason Bourne is a shadowy figure, looming invisibly over a plot that for contractual reasons can’t accommodate him. It’s as if he’s in the sin bin — after a yellow card for demanding director approval — watching the clock tick down until he can take the field again.

The director that Damon objected to is Tony Gilroy — co-writer of all the Bournes and writer-director of Michael Clayton — and next time someone should listen to Damon’s instincts. He said he wouldn’t do another Bourne without Paul Greengrass (director of the last two, Supremacy and Ultimatum) and the weird compromise concocted by Gilroy to keep the franchise alive will probably only satisfy the studio and the Robert Ludlum estate. Bourne is on life support but no more than that.

END_OF_DOCUMENT_TOKEN_TO_BE_REPLACED

Update (2 Aug 2012): The unfinished screener of Song of the Kauri that I watched had a caption that stated that New Zealand imported more timber than it exported. It turns out that this isn’t actually true and that the caption doesn’t appear in the finished version of the film that screens in NZFF. Director Mathurin Molgat emailed me last night:

This was a fact that my research proved to be incorrect. We import exotic hardwoods but our exports of Pinus Radiata far outstrip our total imports. In the finished film that statement is not included.

Funerals & Snakes apologies for any inconvenience the error might have caused.

In a bleak and windswept environment, high in the hills surrounded by forbidding wind turbines, a ragged band of outcasts work tirelessy together to make something out of almost nothing. They are resourceful and determined — battling extreme conditions and overcoming impossible odds. I’m talking about the characters in new Wellington feature film Existence which gets its premiere in Wellington on Friday night, but I might as well be describing the filmmakers themselves who shot the film in the hills around Belmont and Makara in 2011. Existence is the first product of the NZ Film Commission’s low budget Escalator programme and is a testament to the depth of talent in the industry here.

END_OF_DOCUMENT_TOKEN_TO_BE_REPLACED

Review: Star Trek, Ghosts of Girlfriends Past, Rachel Getting Married and Religulous

J.J. Abrams reinvention of Star Trek is as thrilling a ride as we have seen anywhere this year. The franchise has been re-booted (as the saying goes) and re-started from before the beginning of The Original Series as Kirk, Spock, Bones, etc go on their first voyage together and take on their first universe-threatening mad alien.

A very grumpy Romulan miner (Eric Bana) discovers the secret of creating wormholes and uses it travel back in time to wreak revenge on Spock — the ageing Ambassador (a frail looking Leonard Nimoy) who failed to prevent the destruction of his home planet. His revenge will take the form of destroying Spock’s home planets of Vulcan and Earth while the trapped old man is forced to watch. Luckily for the universe (but too late for the people of Vulcan) the hot headed cadet Kirk (Chris Pine) and the young Spock (Zachary Quinto, known in some circles as Hot Spock) are able to save the day and forge a legendary friendship at the same time.