Following a brisk half-hour walk from Newtown I, sweat­ily, made it just in time to Evolve on Eva Street for Inside My Head, Out of My Mind. This is a self-devised piece by three young people about their own lives and struggles with prob­lems like abuse, addic­tion and sexu­al­ity (not that sexu­al­ity is in itself a prob­lem per se but it brings a lot of bag­gage). Essentially, this is “theatre as ther­apy” for the par­ti­cipants but sur­pris­ingly effect­ive and effect­ing for an audi­ence, des­pite the chal­len­ging per­form­ance space. On that note I should point out how nervous I got when I saw the the front door was being locked after every pat­ron and I couldn’t see any altern­at­ive emer­gency exit.

Nature of Conflict: When core fund­ing is found for the VOICE Arts Trust I will be pro­du­cing a web site for them. So, fin­gers crossed then.

VOICE Arts and Evolve scored major bonus points for fin­ish­ing before the 7.35 kick-off of the Hurricanes v Cats game and I made it to The Establishment just in time for Fa’atau’s third minute try. Then it was across the road to meet AF and her friends at the Paramount for Heavenly Burlesque. It was very busy which shouldn’t have been a sur­prise and I was imme­di­ately accos­ted at the top of the stairs by pro­du­cer, Tom Beauchamp, and per­former Maria Dabrowska in some form of bizarre, farmer-sheepdog arrange­ment. This involved the delight­ful Maria bit­ing my leg which was prob­ably a lot less amus­ing for her. I won­der wheth­er, when she told her moth­er that she would be pur­su­ing a career in the arts, this was what she had in mind.

The show itself was a bar­rel of laughs with a good smat­ter­ing of com­edy and dance and acts tak­ing he oppor­tun­ity to pro­mote their own shows around the Fringe. It’s great advert­ising! To give you an idea of the cal­ibre of the com­pany, they could afford to leave Fergus Aitken on the bench in his angel wings. According to the Fringe pro­gramme they have one more week­end but, see­ing as they are the only thing mak­ing any money at the Paramount at the moment, it wouldn’t sur­prise me to see it return in some form. Following the show I got to hang out with old friends in the bar while DJs played plenty of that loud music the young people seem to love.

Nature of Conflict: I can’t go in to my issues with the Paramount in any detail here (at least until they sign their cop­ies of the set­tle­ment doc­u­ment, I get my com­pens­a­tion and they buy my shares) but I hope it is enough to say that events like Heavenly Burlesque are bitter-sweet exper­i­ences. They wouldn’t be hap­pen­ing if I hadn’t built the rela­tion­ships with the per­form­ing arts com­munity in the first place and it is sat­is­fy­ing to see those ini­ti­at­ives pay off but sad that I’m not able to be a part of it any more.

But, as of next Thursday, I will be back in show­busi­ness in a full-time capa­city and hope­fully I can have a pos­it­ive influ­ence once again – without all of the unpleasantness.

I’m not much inter­ested in “for­giv­ing and for­get­ting”, and I still find it thera­peut­ic to point out their fail­ings whenev­er pos­sible. In that spir­it I present the Paramount ad from the Fringe pro­gramme (click on the image for a lar­ger version): 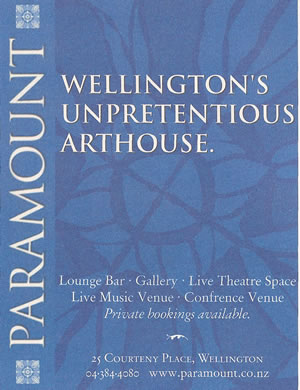 Leaving aside the fact that they can’t spell con­fer­ences or the name of the street on which they do busi­ness (Courtenay), or even the fact that they seem to be everything but a cinema – what exactly does “Wellington’s Unpretentious Arthouse” actu­ally mean?

Are they try­ing to imply that the oth­er art­houses in Wellington are, some­how, pre­ten­tious? Like the Rialto with their Tip-Top Choc-Tops and post-mix Coke? Or the Penthouse which hap­pily plays every Harry Potter film and is still run­ning the angst-ridden, sub-titled, melo­drama The World’s Fastest Indian among oth­er “pre­ten­tious” titles like The Constant Gardener and The Producers? Or – hold on, I’ve run out. That’s it.

Not that any­body but me cares, but if you replaced “pre­ten­tious” with “pro­fes­sion­al” the ad might make some sense.