I should warn you now, this may be bor­ing but if I don’t get this down now I’ll prob­ably lose it forever.

One of Telluride’s charms is its rel­at­ive isol­a­tion. You have to really want to come here. When I first saw pic­tures of the place I thought it was roughly the size of Picton but population-wise it’s actu­ally smal­ler. And yet, one week­end every year it fills up with film buffs, industry types, pub­li­cists and movie stars. The town has one full-time cinema but man­ages to scrape up eight screen­ing ven­ues that start as early as 8am over four extremely busy days every Labor Weekend.

I left Wellington aeons ago (actu­ally 2pm last Sunday) with your common-or-garden flight to Auckland. Then – after writ­ing my CT column in the food court – the twelve hour flight to Los Angeles.

I’m mak­ing a con­scious effort this trip to meet new people and not get stuck in my own little bubble and was pleased to make the acquaint­ance of a gregari­ous Irishman and his wife on the Auckland flight. We talked movies and LA ( where they live) and it was a good start. Sadly for con­ver­sa­tion, the seat next to me on the LA flight was empty but it was a bless­ing for legroom. Next to me on the Denver flight was a young guy who slept the entire flight with his head on the tray table. Oh well.

30 films to choose from on the in-flight enter­tain­ment sys­tem and noth­ing that I wanted to watch, so I read Paul Kelly’s How to Make Gravy auto­bi­o­graph­ic­al app, watched an amus­ing Top Gear and got some sleep. The arrival at LA was spec­tac­u­lar – clear blue skies and mag­ni­fi­cent views of the coast and the city.

My itin­er­ary (the one I put in my phone, not the one I got from my travel agent) told me I had five hours to wait before my con­nec­tion to Denver, so – me being me – I decided to watch a movie. Google had told me that there was a screen­ing of Moonrise Kingdom at the ArcLight in El Segundo at 2.30 and, also, that the cinema was only an 11 minute taxi ride from LAX. As the film does­n’t open in NZ until Thursday, I felt I had an oblig­a­tion to catch it so I could review it for Cinematica this week. Cleared cus­toms and immig­ra­tion by 2.10, found a taxi out­side the ter­min­al, waited while he looked up the address, then got to the pic­tures with five minutes to spare. 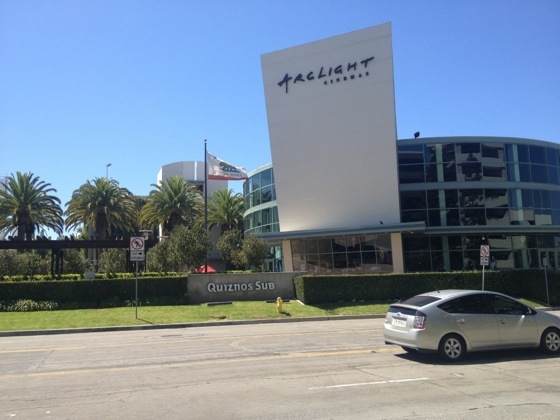 Service was excel­lent, fancy chip cred­it card was accep­ted, time for a pit stop, and I was seated in time to see the new trail­er for The Master. Sorted.

Incidentally, the ArcLight pro­motes itself as a “dis­turb­ance free” cinema – no tick­ets sold five minutes after advert­ised start time and no one seated after the fea­ture starts. Great idea (does­n’t stop people talk­ing though).

Came out of a very sat­is­fy­ing screen­ing – gor­geous DCP as you might expect – took some pho­tos then asked the café staff where I could find a cab back to the air­port. They called one for me, told me I had 15 minutes so I ordered a cof­fee and went out into the muggy after­noon to wait.

And then I watched the taxi sail past me and head around the block. Bugger, I think, and chase after him. In the car park I find his empty cab – he’s gone in to the cinema to find me which is bloody lucky as it turns out.

Back at LAX I check my board­ing pass which reads “Boarding: 1645”. the cur­rent time is 1645. Triple bug­ger! I haven’t even gone through (for­mid­able) secur­ity yet and I don’t know what gate I’m headed for. Panic ensues and I end up run­ning for the flight, get­ting to the cor­rect gate in time for my sec­tion of the plane to be called.

When I trans­ferred my itin­er­ary to my cal­en­dar I saw 1720 and put it in as 7.20pm. Elementary mis­take but almost cata­stroph­ic. Still, no harm, no foul. Just got on the Denver flight a little breath­less and sweaty, that’s all.

Flying against the sun meant it was nearly 9pm and dark by the time I arrived in Denver (flight is 2 hours 10). You have to take a train to get from the gate to the ter­min­al (very amus­ing piano stings and boss jock voice announce each stop). At bag­gage claim I saw a spe­cial ver­tic­al bag­gage claim for skis for the first time and then got a shuttle bus to the car rent­al desk where there was anoth­er wait in anoth­er queue. 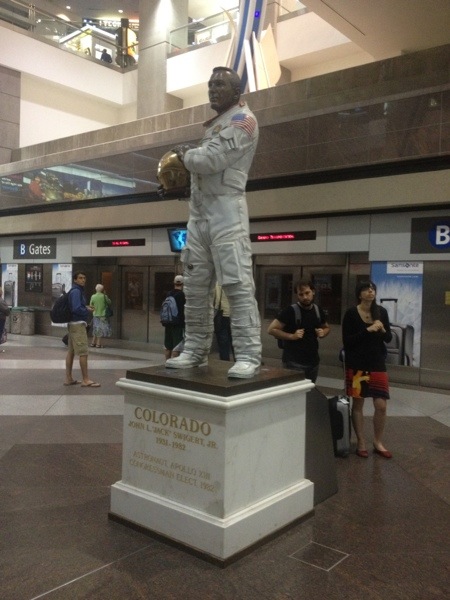 Next chal­lenge: driv­ing in a strange city, in the dark on the wrong side of the road. Much expendit­ure of adren­aline later (and a bit of cheat­ing using Google Maps via Telecom roam­ing data) I make it to a seedy but clean Motel 6 where I can clean up and crash. 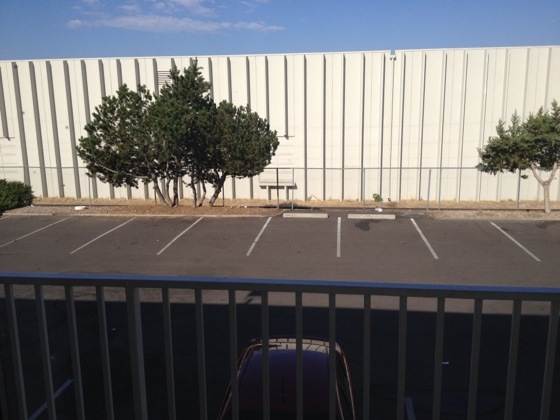 I’m going to pause now as I’m writ­ing this on my phone and I’m almost out of bat­tery. More adven­tures later…