Feel like visiting somewhere new but don’t have the time or money right now? A film festival is the next best thing. If you want to understand a country and its culture it’s hard to go past watching their commercial cinema – their multiplex and blockbuster fare rather than the arthouse. 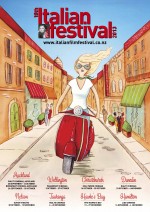 That’s why the regional film festivals are so important – and the Italian Film Festival is king with attendance numbers every year that are greater than all the other regional festivals put together. Festival director Tony Lambert has been at this for over a dozen years and his formula works – a well-constructed survey of the current Italian cinema featuring broad comedies, romances and historical dramas. These are the films that Italians have been watching.

This year’s festival opens at the Paramount on the 9th of October with a gala screening of Welcome to the North (a sequel to the 2010 smash hit Welcome to the South, itself a remake of the French comedy Welcome to the Sticks). After that we have two and a half weeks of screenings with most films playing four or five times.

I’ve already had a sneak preview of four of the eighteen titles and they were – justifiably – all over the place. Love is in the Air is a broad sex comedy that hints at a sauciness that it doesn’t quite deliver on. Dull businessman Andrea and beautiful housewife Giulia are prompted to spice up their love life by the arrival of Giulia’s old school friend Max – now a Hollywood porn star. The whole household (including their teenage son and their maid) try and mine the famous lothario for tips but the actual lessons learned are much more traditional. Originally released in 3D, the version we will see here doesn’t have quite the same visual ‘pop’ but the broad Carry On-style humour will appeal to many.

In The Entrepreneur, a factory owner (Pierfrancesco Favino from Rush) struggles to keep his business and his marriage afloat. Until a disappointing dénouement acclaimed director Giuliano Montaldo builds palpable tension and the de-saturated-to-almost-black-and-white photography makes Turin look like the fading industrial powerhouse that it is.

An indentured Chinese immigrant forges an unlikely friendship with an ageing fisherman in Shun Li and the Poet, winner of several Italian film awards including for lead actress Tao Zhao. The Poet is played by familiar face, Croatian Rade Serbedzijia with a grizzled warmth that counterpoints the ugly ignorant racism of his friends and the cold-hearted practicality of the Chinese businessmen. Director Andrea Segre uses the Chioggia setting perfectly – an old world working class town on the Venice lagoon, its history contrasting with the faces of the new arrivals.

The only film in the festival to have played here before is 2012 Berlin Golden Bear winner Caesar Must Die but, from memory, it got a little buried in last year’s film festival programme and deserves more attention than that: a group of hardened prisoners stage Julius Caesar. The film isn’t a documentary even though the performers are playing themselves playing Shakespeare. It’s fascinating watching the power relationships of the cons (and ex-cons) mirror the characters and there’s an extra layer of interest in seeing the play created in Rome for a change.

[Printed in the October issue of Wellington’s FishHead magazine.]