Big Stan is the debut feature by comic actor Rob Schneider, best-known for a pair of ghastly adult comedies featuring his hapless male prostitute alter-ego Deuce Bigelow. Schneider amazingly maintains a solid career (largely via the patronage of his great friend Adam Sandler) but there’s no satisfactory explanation for how he was let loose with a camera except that Hollywood is genuinely out of ideas. 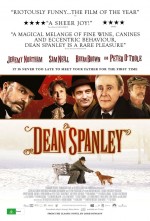 Dean Spanley is a delightful, semi-local, surprise directed by No. 2’s Toa Fraser and starring Sam Neill, Bryan Brown and Peter O’Toole. Once a week Fisk Jr (Jeremy Northam) dutifully visits his irascible old father (O’Toole). On an outing to hear an Indian swami talk about reincarnation they meet Dean Spanley (Neill) who, when suitably lubricated, reveals his own experiences with reincarnation (or his own mental befuddlement depending on your point of view).

Utterly charming, moving and sweet, Dean Spanley is a very safe bet for a night out. Fraser is a director with a sure touch and O’Toole is nothing less than a magician — I can’t think of a better word for the spell he casts in this film.

Welcome to the Sticks is the biggest film ever to hit France, and an American remake is understandably on the way, but despite it’s easy-going drollery it is the same film they’ve been making in France for years: urban sophisticate gets lessons in living from down-to-earth ‘real’ people (taxi drivers, gardeners or car valets and in this case postmen). Kad Merad is a Post Office manager under pressure from his wife to get a promotion to somewhere glamorous — the Riviera perhaps. Instead he is transferred to unfashionable Bergues in the far north where his fears of a cultural and climatic no man’s land don’t quite come true.

The film relies very hard on it’s tried and true fish-out-of-water schtick but the boisterous camaraderie between the characters means it easily wins you over in the end.

Notes on screening conditions: Big Stan and Zack and Miri were at Readings during sparsely attended public sessions. Dean Spanley was also at Readings, this time a Glengarry’s preview. Welcome to the Sticks has been out a couple of weeks but I’ve only just got to it — a raucus Sunday afternoon session at the Lighthouse in Petone. They loved it.