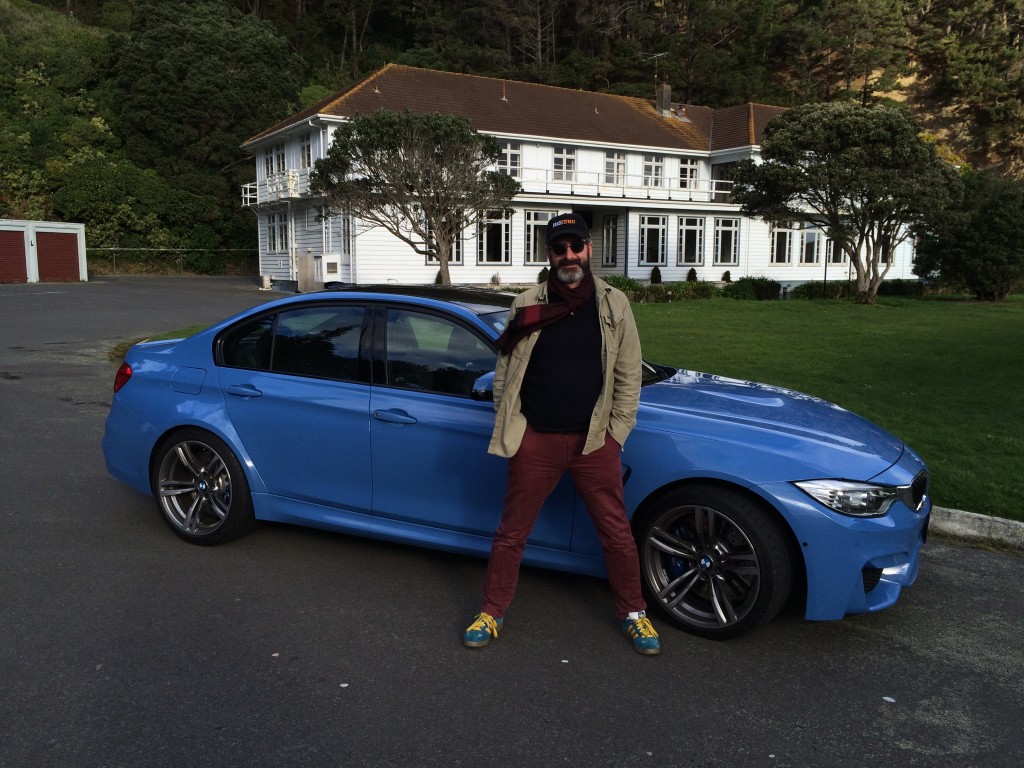 It has been nearly four months since I pos­ted some­thing oth­er than a pod­cast to this site and two years since I pos­ted one of my “Best of the Year” film roundups. I haven’t seen enough this year to jus­ti­fy one of those but, see­ing as the year is reach­ing its con­clu­sion, I feel I ought to prove to myself that I can still pro­duce a few words every now and then.

If all you knew of me was my out­put here at F&S then you could be for­giv­en for think­ing that I had gone off the boil a bit. After all, the site became pop­u­lar for my reg­u­lar film reviews and the audio con­tent that now dom­in­ates was simply an added bonus. I have taken to call­ing 2014 a sab­bat­ic­al year, a pal­ate cleanser, but that means that at some point I need to get back on the horse and start rid­ing. I have every inten­tion of doing that in 2015 but — if it proves any­thing like the last 12 months my wishes might not mat­ter a damn.

This time last year I had just giv­en up a luc­rat­ive fixed-term con­tract doing some­thing that bored me for a less luc­rat­ive inde­term­in­ate con­tract doing some­thing that I really wanted to do. I was inter­im edit­or for Wellington’s life­style magazine, FishHead, and hop­ing like heck that I was prov­ing to the pub­lish­ers that I could do the job on a per­man­ent basis. My only pre­vi­ous print edit­ing exper­i­ence had been with the late and semi-lamented ONFILM magazine, a ten­ure that las­ted only two issues before it col­lapsed in a mess of bad debts and recrim­in­a­tions. I was just one of many that ended up out of pocket.

But I was hooked. Agreed, I picked a bad time to fall in love with print, but the heart wants what it wants. 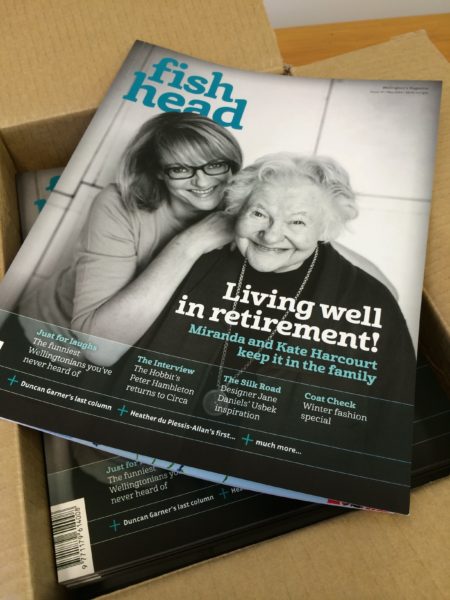 The May 2014 issue of FishHead, hot off the press, fea­tur­ing cov­er stars Miranda Harcourt and Dame Kate. Photo by the great Mark Tantrum.

It took a few months – and some false starts – but even­tu­ally I was giv­en the helm on a per­man­ent basis and the pro­cess of rein­vent­ing FishHead began in earn­est. A redesign in April changed many people’s per­cep­tions of us and a steady improve­ment in dis­tri­bu­tion, mar­ket­ing, pub­li­city helped bring more read­ers. The qual­ity of the writ­ing, the pho­to­graphy, the illus­tra­tion and – the one area I can claim cred­it for myself – the story choices, all helped them stay.

At the last Nielsen sur­vey FishHead read­er­ship had grown 30 per­cent sin­cer I took charge and was offi­cially the fast­est grow­ing magazine in the coun­try. Advertising sales are up. Circulation is up. Subscriptions are up. Profits exist. By almost every met­ric that we use to judge these things it has been an extremely suc­ces­ful eight months. Also, extremely hard work but what isn’t?

In March, I was giv­en the oppor­tun­ity to spend ten days in Kuala Lumpur on a pro­ject for Education New Zealand, man­aging a small 48 Hour film com­pet­i­tion. I trav­elled with four New Zealand film­makers who would all be embed­ded with loc­al film schools and provide them with ment­or­ing and sup­port through the event. Aidee Walker, Johnny Barker, Annie Duckworth and Hayden Weal were my com­pan­ions and com­padres and I couldn’t have asked for a bet­ter bunch of people to travel and work with. Malaysia was fas­cin­at­ing, excit­ing, hot and inspir­ing. We arrived while the search for the miss­ing Malaysia Air flight MH370 was at its height and every day there were raised and thwarted hopes of a break­through or discovery. 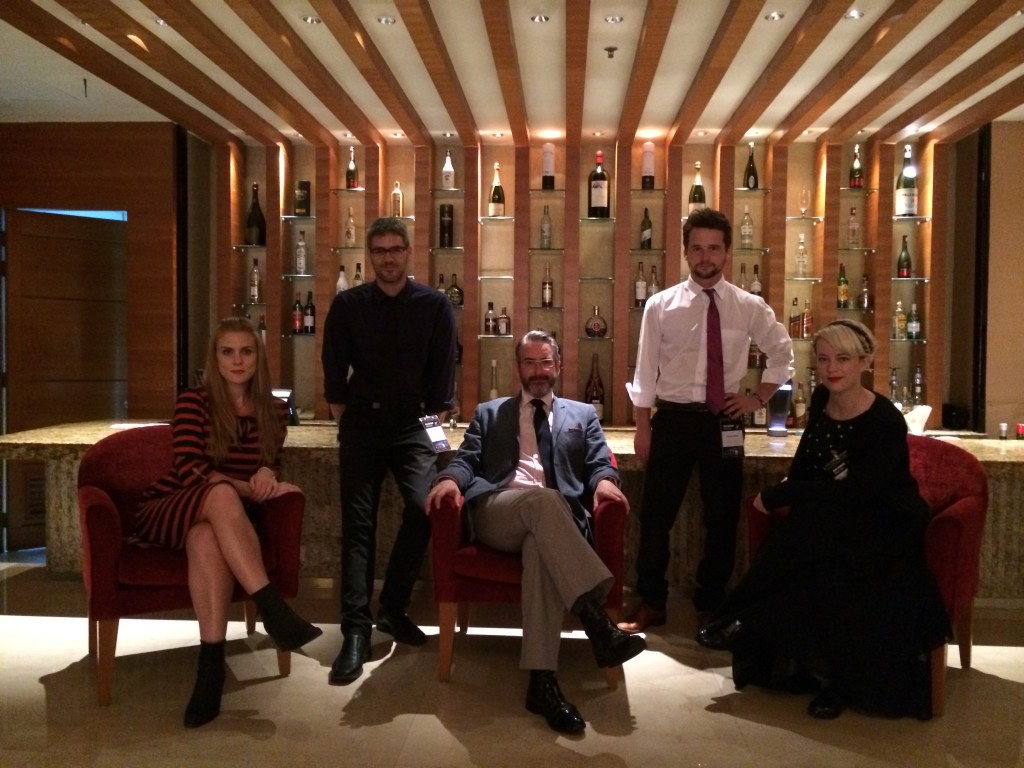 In June, I got sick. A week of heavy flu at first (fever, shiv­er­ing), then a week feel­ing bet­ter and then anoth­er week of flu. “Odd”, I thought, “Flu doesn’t usu­ally work like that.” The first doc­tor told me I had the flu and to rest. When things didn’t improve the second doc­tor (my usu­al GP) made me get some blood tests which showed the pres­ence of the Epstein-Barr vir­us – glandu­lar fever. If you’ve ever suffered from this, you will know that there is no cure as such, you just have to ride it out with rest, good nutri­tion, lack of stress, etc. and hope for the best. In most cases, six weeks to two months of not doing any­thing strenu­ous should get rid of the worst. After that, you can feel the effects for up to a year afterwards.

I still had a magazine to put out every month – those dead­lines don’t go any­where – so I had to reduce all my extra activ­it­ies to the min­im­um to pre­serve the tiny amounts of energy that I had at my dis­pos­al. I said no to almost every social invit­a­tion, resigned from the vari­ous boards and com­mit­tees I had found myself on, quit the gym and, it seemed, slept whenev­er I wasn’t work­ing on the magazine. 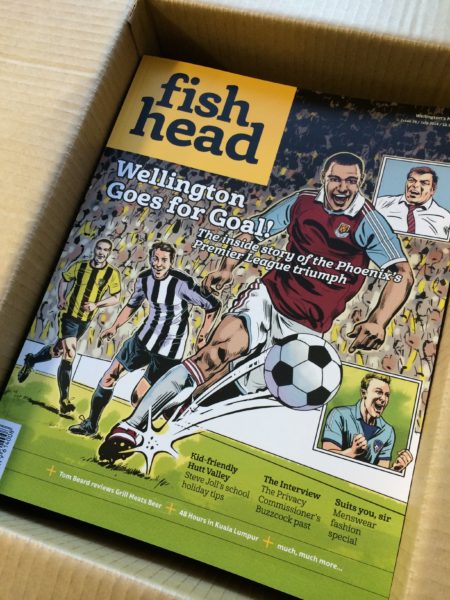 Still my favour­ite FishHead cov­er, an idea that worked per­fectly and lit­er­ally a game changer for us in so many ways.

It’s the first time in my life that I’ve found myself con­strained by health, the first time that I haven’t been able to get through some­thing with sheer will­power. I used to slog through or just make myself get up earli­er in the morn­ing or work later at night. That’s just not pos­sible with glandu­lar fever and my nag­ging worry is that I might nev­er be quite right again. Even now, I have spent most of the last five weeks on anti­bi­ot­ics for sec­ond­ary bac­teri­al infec­tions in my sinuses and throat. My immune sys­tem just isn’t strong enough to fight that stuff off like it used to. Every time I feel well enough to go back to the gym and fight for my fit­ness once again, some­thing turns up to set me back.

There was, of course, one event com­ing up that no amount of glandu­lar fever was going to keep me from get­ting into: the 2014 Football United tour organ­ised by the Wellington Phoenix and fea­tur­ing Premier League teams West Ham United and Newcastle United. Regular read­ers and listen­ers will know that I am a chron­ic West Ham fan and I wasn’t going to miss a moment of this. Thanks to FishHead I could get media accred­it­a­tion which meant access to press con­fer­ences (I watched the Eden Park game from the media centre) and I also made sure that I was around all the open train­ing ses­sions that were organised.

The West Ham and Phoenix people were all bril­liant to work with and I got to meet a few of the behind-the scenes staff as well as West Ham co-chairman David Gold and – even­tu­ally – play­ers Winston Reid, Kevin Nolan and man­ager Big Sam Allardyce. From a foot­balling point of view the tour was a dis­aster for West Ham, los­ing both games and injur­ing star striker Andy Carroll, but this season’s form – and their pos­i­tion in the league – surely means it was all worth­while. For me, it was one of the great exper­i­ences of my life. 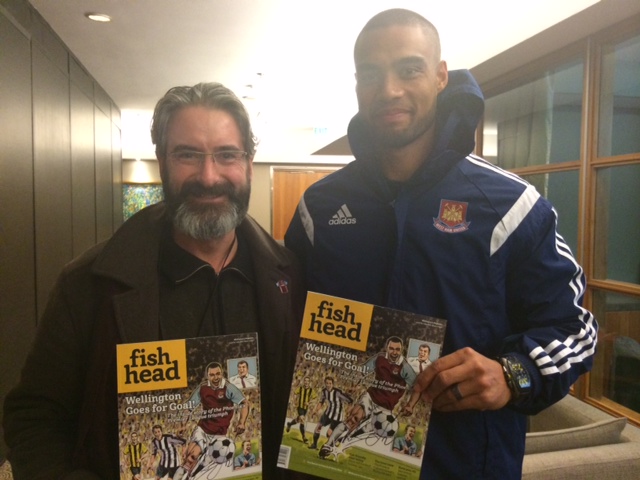 The edit­or meets one of his heroes.

At the begin­ning of the year, due to old-fashioned cre­at­ive dif­fer­ences, we pulled the pin on Cinematica, the weekly movie pod­cast, and I star­ted plot­ting what I could do to replace it. Thanks to the gen­er­os­ity of a few dozen fans of the site and the old pod­cast, Kailey Carruthers and I were able to raise some PledgeMe funds to buy some gear and get a new show under­way. If you are a reg­u­lar vis­it­or here, you’ll know this already as it is all we talk about now. Rancho Notorious has become more than a pod­cast, though, for me. Thanks to the sup­port of my won­der­ful and gen­er­ous part­ner, Kaarin, we have been able to turn the show into a weekly social event allow­ing us to hang out with friends old and new, eat, drink and have fun.

I always wanted to have the kind of home where people were always wel­come to vis­it and the door was always open. Thanks to Kaarin that is now a real­ity and it is her skills at host­ing that have allowed me to come out of my shell a bit and live a little. We make a great team. This Christmas has seen almost no let up in the social­ising as we have hos­ted the FishHead Christmas Party, “A Very Rancho Christmas” and a fam­ily Christmas party, all in about a week. No won­der I’ve ended the year so tired…

This is also an oppor­tun­ity for me to thank all the sup­port­ers that con­trib­uted to the PledgeMe cam­paign, to Phil G for the audio engin­eer­ing les­sons and to all the film com­pan­ies and pub­li­cists who have helped get us some great guests: Cliff Curtis, Peter Hambleton, Eddie Izzard, James Cameron (sort of), Martin Kemp, Toa Fraser, Peter Mullan, Rene Naufahu, Glenn Kenny and more… We’ve got plans for more fun and games in 2015.

All of which should help make clear why the writ­ing part of the deal has been so hard to do – let alone the watch­ing of all the films which takes so much time.

I’m try­ing to work out a sched­ule that allows me to do all the things that I want and love to do. The magazine comes first, of course, because they pay all the bills. But I want to con­tin­ue pod­cast­ing, I want to get back into writ­ing about film because I enjoyed it (and was good at it) even though it’s the hard­est of all of these things to actu­ally do, I want to improve this site so that it is a worthy repos­it­ory for all my work and has an audi­ence that appre­ci­ates it. And, you know, I’ve got a couple of oth­er schemes up my sleeve that I want to get launched in the next few months too.

So, all of that, plus watch­ing West Ham and the ‘Nix every week, read­ing a few magazines, maybe even read­ing a book once in a while; mak­ing a dent in all the unwatched great tele­vi­sion that’s out there (next stop True Detective); finally get­ting around to watch­ing everything by Bresson or everything Brando appeared in (both long-standing unfin­ished projects).

And to do all of that while pay­ing max­im­um atten­tion to my fam­ily and friends. It’s a chal­lenge that I finally feel up for after feel­ing so tired for so long. I hope you’ll be with me for the ride.

(Oh, and by the way, this also happened…) 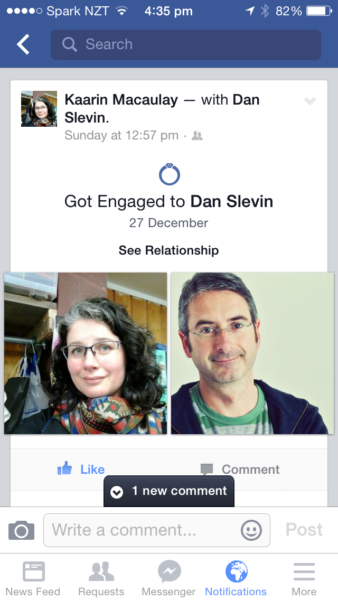 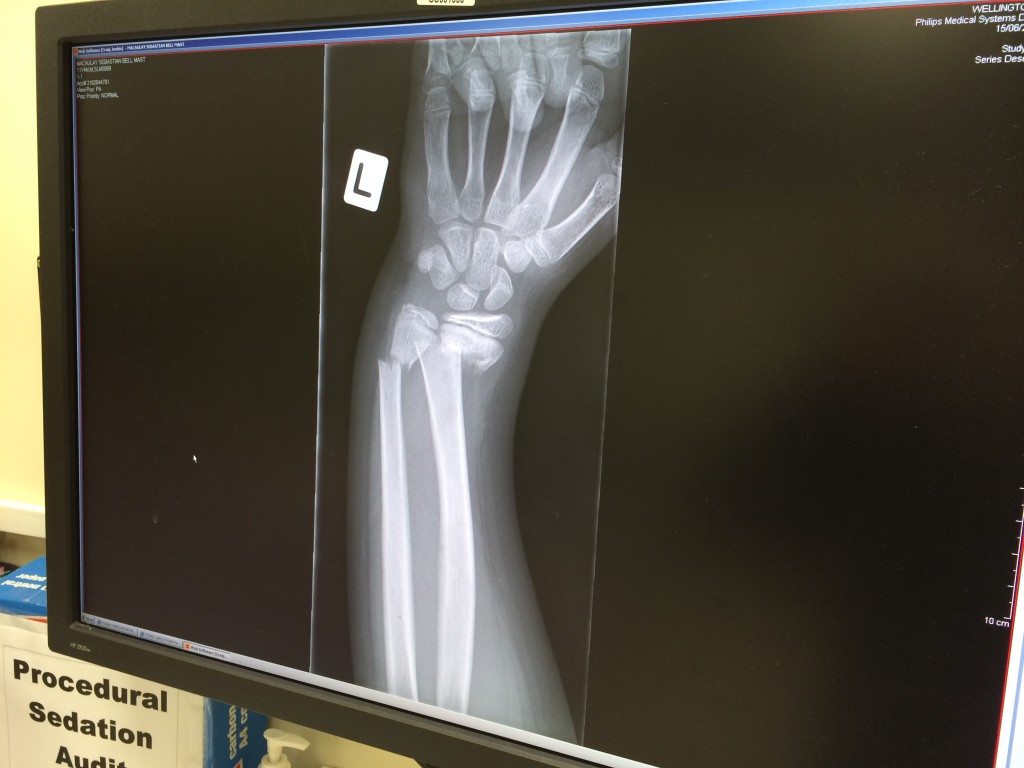 The 11-year-old breaks his arm com­ing off a moun­tain bike. Pretty impressive. 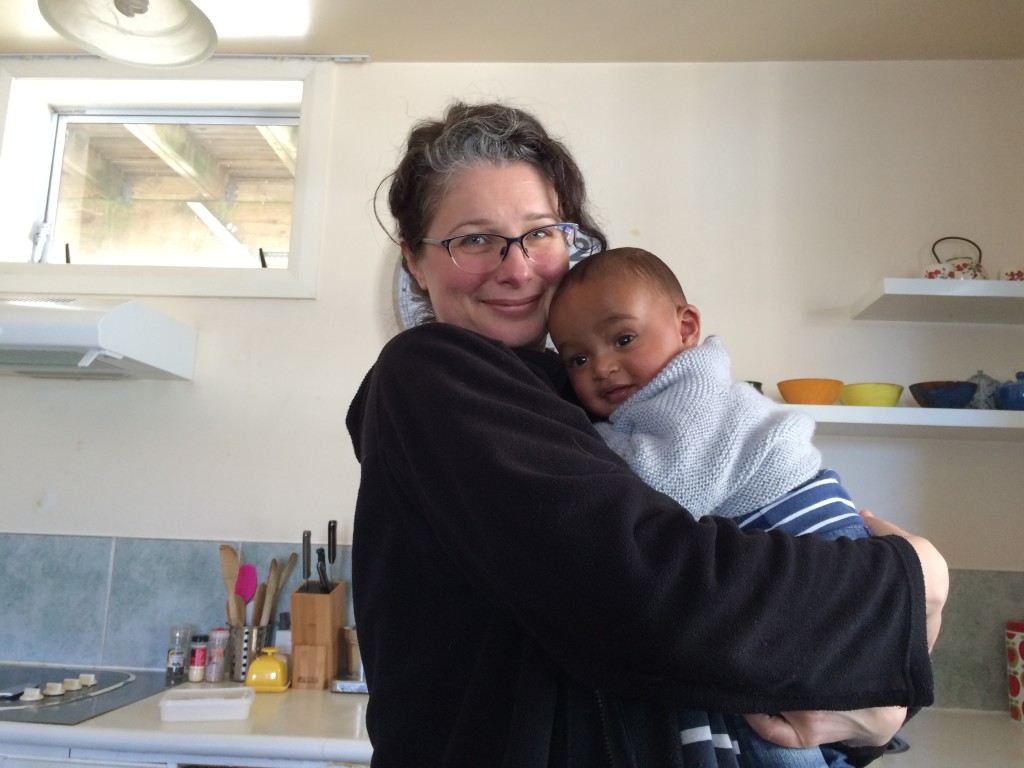 My girl and my neph­ew Leo. 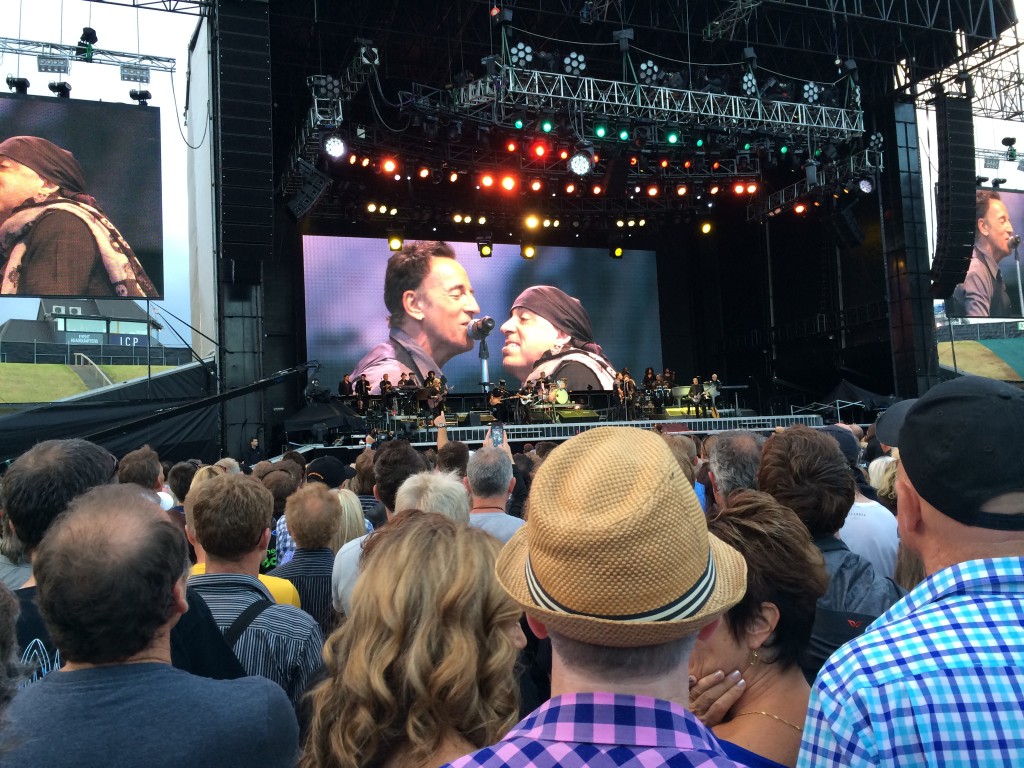 Bruce Springsteen and Miami Steve on the big screen at Ericsson Stadium, March 2 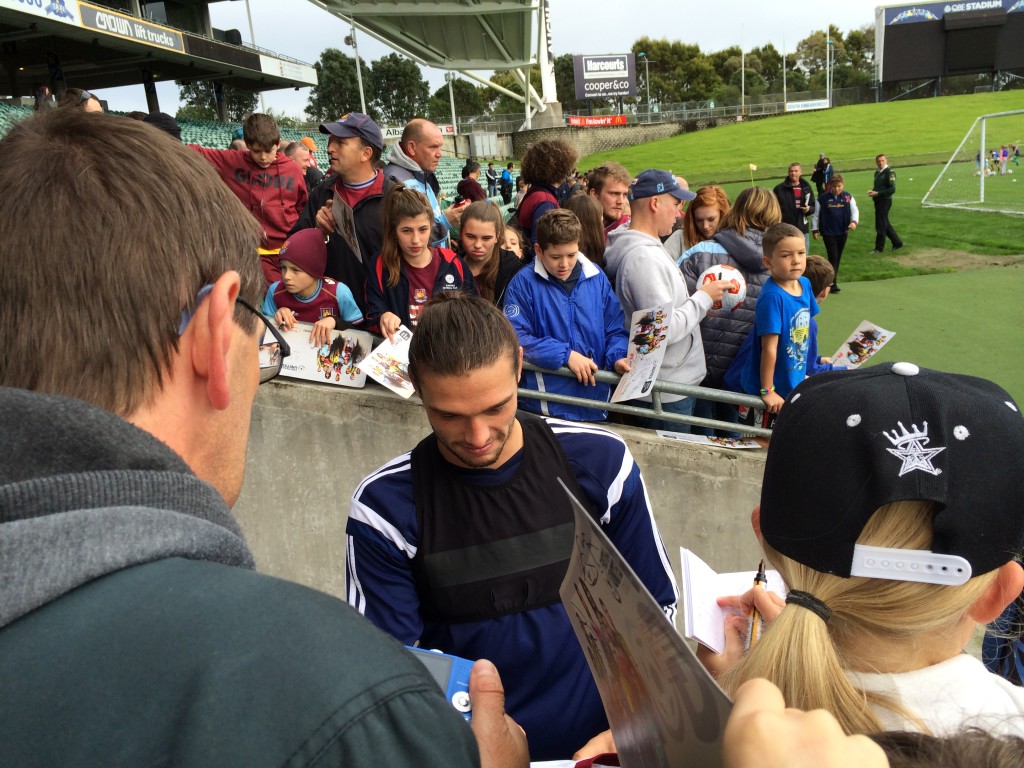 Andy Carroll sign­ing auto­graphs at North Harbour Stadium after the injury that would keep him out of the first four months of the sea­son. I don’t think he knew how bad it was going to be then. Top bloke all the same. 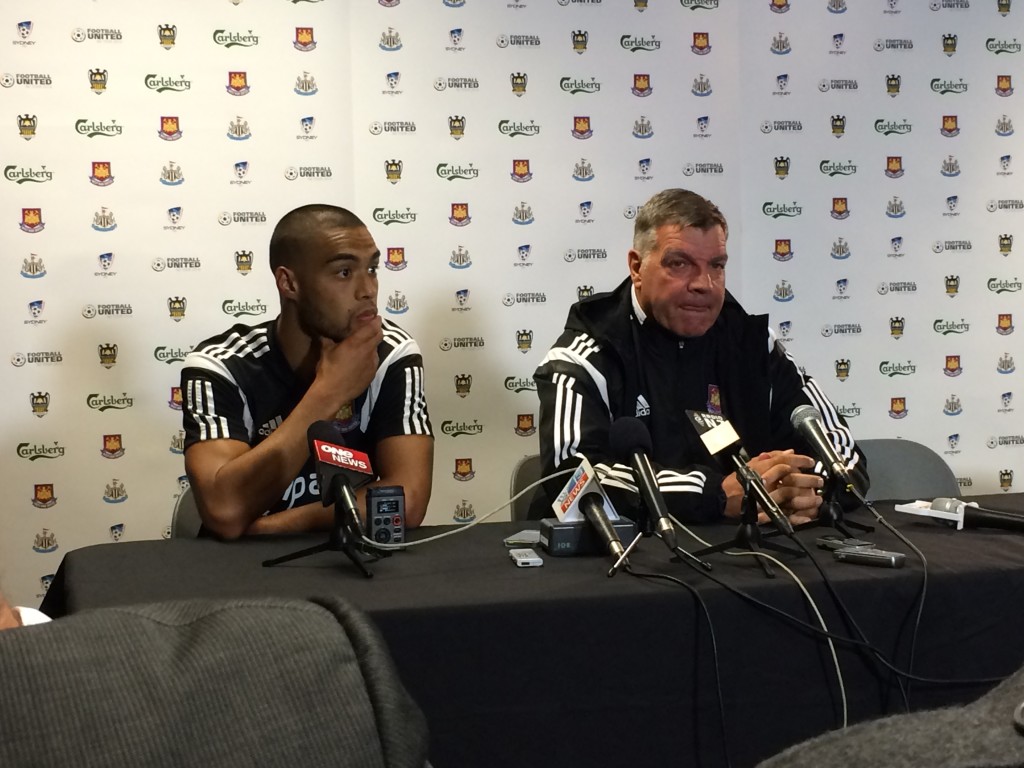 West Ham press con­fer­ence after the their loss to the Phoenix at Eden Park. I think they are much hap­pi­er affairs now. 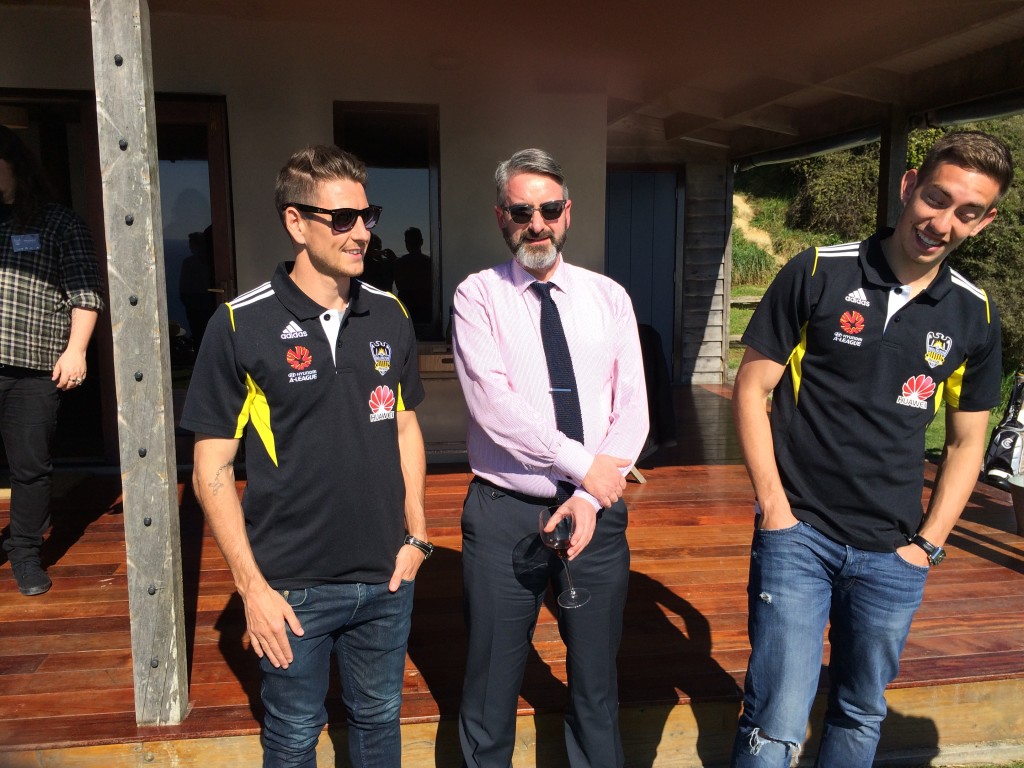 Left to right: At time of writ­ing cur­rent A‑League Golden Boot lead­er Nathan Burns, your cor­res­pond­ent, mid­field­er Alex Rodriguez. Notice how I am hold­ing my hands across my tummy as I know I am going to want people to see these photos. 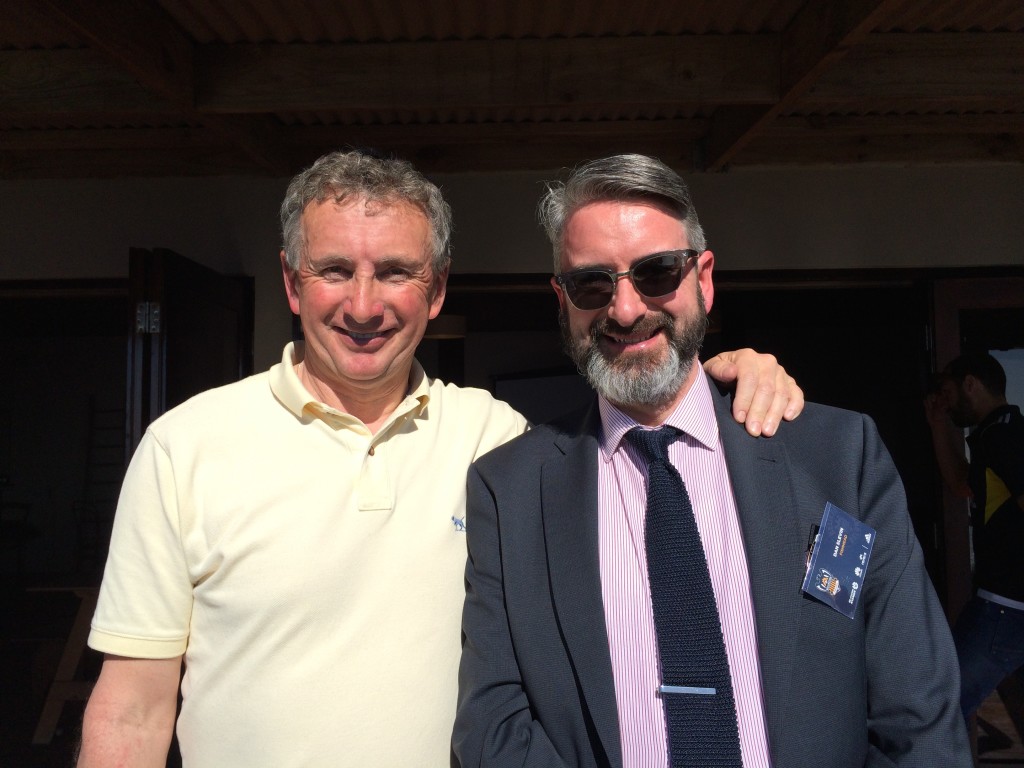 Wellington Phoenix coach Ernie Merrick and yours truly at the ‘Nix pre-season media day on 30 September. I learned that I can shoot a clay pigeon bet­ter than I can shoot a three-iron.