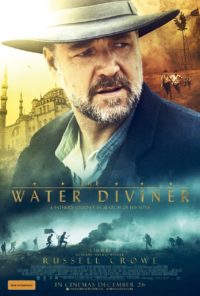 As an act­or, he has been most suc­cess­ful when sub­tlety is eschewed and grand ges­tures and emo­tions are called for — the angry skin­head in Romper Stomper, Oscar-winning Maximus in Gladiator, con­jur­ing up a good per­form­ance des­pite an aver­age singing voice in Les Misérables ‚and sav­ing the world with the voice of God in his head in Noah earli­er this year. Even my favour­ite Crowe per­form­ance, the gay son in the poignant 1994 Australian drama The Sum of Us, had a heart as big as, they say, a whale.

This big-heartedness is the great strength of Crowe’s dir­ect­ori­al debut, The Water Diviner, the story of a griev­ing fath­er search­ing for what remains of his sons, who he allowed to enlist and then be all but oblit­er­ated on the unfor­giv­ing coast of the Dardanelles. This is an Anzac story, and it couldn’t be bet­ter timed with our atten­tion turned once again to those who fought and died for us a hun­dred years ago.

Another strength of Crowe’s film — and the ori­gin­al script by Andrew Knight and Andrew Anastasios — is that it nev­er lets us for­get that two sides were sac­ri­fi­cing their young men on those cliffs. The Turks, who dur­ing the story are help­ing the British and Anzacs loc­ate the remains of the dead on the hill­side at the same time as pre­par­ing to defend their home­land once again from the Greeks on anoth­er front, lost as many as the Allies, and their story is usu­ally a sideshow in these things. The per­form­ances by Yilmaz Erdogan and Cem Yilmaz — as Turkish officers with mixed motiv­a­tions in aid­ing the bereaved Victorian farm­er — help restore that bal­ance somewhat.

The Water Diviner is not without evid­ence of those bad habits, though. An ill-advised romantic sub-plot with a Turkish wid­ow (played by Russian beauty Olga Kurylenko) detracts from the solidly anti-war, yet cour­ageously meta­phys­ic­al, main story. The Water Diviner, on a rel­at­ively low budget, also man­ages to help me for­get the wobbly rub­ber bay­on­ets of the sole New Zealand fea­ture on this sub­ject, Dale Bradley’s deeply flawed 1992 adapt­a­tion of Maurice Shadbolt’s Once on Chunuk Bair.