Bear with me for a moment while I get used to the capa­cious­ness of Mr Tuckett’s foot­wear. Hmmn, roomy ‑But com­fort­able, so let’s get in to it. 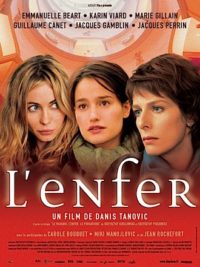 When Krzysztof Kieslowski died of a heart attack in 1996 the world of cinema lost a vis­ion­ary and humane artist and art­house cinemas the world over lost a meal-ticket. Films like the Three Colours Trilogy were so suc­cess­ful and so beloved that it is not sur­pris­ing that KK’s unpro­duced scen­ari­os would attract atten­tion. The latest to arrive is L’enfer, the second part of anoth­er pro­posed heavy­weight tri­logy (fol­low­ing the Cate Blanchett-Giovanni Ribisi shambles Heaven a couple of years ago).

Three sis­ters are estranged from each oth­er and, seem­ingly, from life itself. Sophie (Emmanuelle Béart) dis­cov­ers her hus­band is hav­ing an affair; Anne (Marie Gillain), the young­est, has just been dumped by her University pro­fess­or lov­er and Céline (Karin Viard) seems doomed to a lonely exist­ence run­ning errands for her neigh­bours and vis­it­ing their mute moth­er (Carole Bouquet) until a hand­some stranger reads some philo­sophy to her in a bar. The three women’s stor­ies run par­al­lel to each oth­er until the truth is revealed about the fam­ily tragedy that trau­mat­ised them all.

The act­ing is first rate. The often icy Béart digs very deep for a change and Viard has one heart­break­ing scene where she finally opens up to someone and then soon wishes she has­n’t. Oscar-winner Danis Tanovic (No Man’s Land) dir­ects with a sym­path­et­ic eye on Kieslowski’s leg­acy, though the fact that every image seems to have to carry sig­ni­fic­ant meta­phor­ic weight can get a little wearing.

Satisfying and mov­ing, L’enfer is Kieslowski-lite (Clayton’s Kieslowski if you prefer). For the real thing, don’t miss The Double-Life of Véronique when it returns in a few weeks. Trivia: Marie Gillain played Saffy in the French ver­sion of Absolutely Fabulous. Who knew such a thing existed? 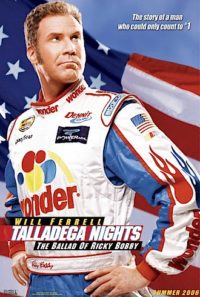 Also this week: The per­plex­ing (and slightly pasty) charms of Will Ferrell are on full dis­play in Talladega Nights: The Ballad of Ricky Bobby. Ferrell plays anoth­er of his love­able man-children, the eponym­ous NASCAR driver who is forced to re-evaluate his life and val­ues when chal­lenged by macchiato-drinking Formula 1 driver Jean Girrard (a scene-stealing Sacha Baron Cohen). It’s pretty funny but it’s no Dodgeball. 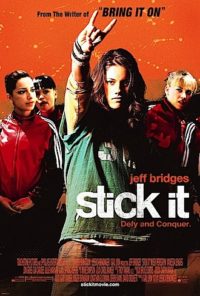 Stick It is a girl-power gym­nastics fantasy star­ring someone called Missy Peregrym and a decrepit-looking Jeff Bridges. Bridges appears to have some kind of speech imped­i­ment which may be due to the con­stant pres­ence of chew­ing gum in his mouth or to a mild stroke, but I’m no expert. In one scene Peregrym’s mav­er­ick gym­nast flaunts her rebel cre­den­tials by wear­ing a Black Flag t‑shirt. I’m not sure how much a real-life 17 year old cham­pi­on gym­nast should know about the 80’s punk scene but she could learn a lot by watch­ing Paul Rachman’s thor­ough his­tory of the times, American Hardcore. 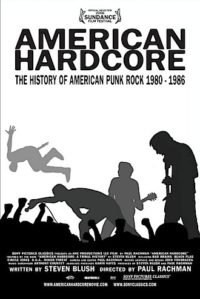 Of course the mind­less viol­ence, nar­ciss­ism, nihil­ism, crypto-fascism and bloody awful music will prob­ably cure her of any romance she might have about the era. Me, I could­n’t wait to get home and listen to “Jessie’s Girl” over and over again to give myself a pop music exorcism.

Notes on screen­ing con­di­tions: I’m pleased to see The Penthouse has fixed that annoy­ing prob­lem with the shut­ter tim­ing in Cinema Two but the cof­fee had a hor­rible deter­gent fla­vour and was, sadly, undrink­able (L’enfer); Cinema Three (the only one I have sat in so far) at The Empire in Island Bay may well have the best sound of any cinema in Wellington (Talladega Nights); Cinema Four at Regent-on-Manners has no digit­al sound which does­n’t really mat­ter when your speak­ers have blown (Stick It); and The Brooks at The Paramount is a lovely little room but is it really too much trouble to clear the bottles and glasses from the pre­vi­ous ses­sion? (American Hardcore).

Nature of con­flict of interest: L’Enfer is also play­ing at the Academy Cinemas in Auckland whose web­site I designed and maintain.