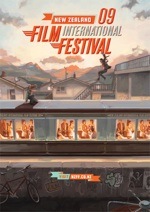 The Wellington Film Festival (sorry, New Zealand International Film Festival, Wellington Branch) is a huge undertaking for the committed cinema-goer. Every year we devour the programme for weeks in advance, scheduling annual leave and long “lunch breaks”, trying to work out what is essential and what isn’t. After 20 years of this, I’ve only just begun to realise that in the search for the essential many other pleasures have been passing me by. This year, before I even looked at the programme, I asked the Festival to choose a stack of DVDs for me, with the emphasis on the unheralded and the unexpected. Thus, of the 13 films I’ve been watching over the last three or so weeks, all but one of them were from the back half of the book (and probably would not have been on my personal shortlist) but all of them had something special to offer. So, is my advice for the Festival to not book in advance but instead choose films at random depending on your own availability and proximity to a venue? Maybe it is.

I didn’t quite ‘get’ Blind Loves, a documentary-like film about a series of Slovakian blind couples and their relationships and lives — gorgeous to look at, certainly, but I wasn’t sure how much was contrived for our benefit.

One of the truest representations of male friendships I’ve ever seen on screen is found in Humpday, a very entertaining Seattle indie. Ben and Andrew were best friends at college but have drifted apart since then — Ben into safe, middle-class marriage and career and Andrew drifting into a life of incomplete art projects in Mexico. Reunited for a weekend, they drunkenly decide to make a home-made gay porn film (starring themselves) as a work of art and statement about friendship between straight men. Or something. Ben’s wife is understandably horrified which sort of forces them to go through with it. Brilliant.

Black humour from Scandinavia was another theme of my selection: Dead Snow might as well just titled Nazi Zombies as that’s what everyone is calling it. A cool idea with some lovely bloody set-pieces is ultimately unsatisfying due to the lack of internal logic and strangely motivated antagonists. Sweeter and funnier, is The Higher Force from Iceland — a depressed poet and debt collector invents a relationship with a gangland kingpin to boost his cred. Of course, one tiny lie soon blossoms into complete disaster. A car crash of styles and cultures – a bit like Iceland itself right now.

Two misunderstood heroes undertake quixotic adventures to raise awareness of global issues in two separate docos. Big River Man is the absorbing tale of a Slovenian alcoholic (who looks like Mr Incredible) who swims the length of the Amazon river to protest at deforestation and Enjoy Poverty is by a Dutch artist named Renzo Martins who travels through the Congo with the breathtakingly patronising aim of persuading the locals to be happy with their lives as circumstances are unlikely ever to change. (In his defence he is also trying to get them to take ownership of the images of their poverty as one of the only indigenous export industries available.) By the end of each film you realise to what extent each man is driven by ego rather than philanthropy and each is fascinating and infuriating.

Talking of egos, James Toback’s Mike Tyson autobiography Tyson is an often moving portrait of a damaged and damaging soul. Tyson speaks for himself throughout and the material is artfully shaped by Toback – a fine director and one of Iron Mike’s only true friends.

When the Americans decided to go in to space they set up shop in sunny Florida. For some reason the Soviets went to godawful Kazakhstan. Paper Soldier is a handsome, epic drama about the early Russian space program, specifically the six weeks immediately prior to Gagarin’s first voyage. Owing a lot to (but not quite living up to) Chekov and Tarkovsky, Paper Soldier is grand and gritty in equal measure. A more attractive look at Kazakhstan is offered by Wild Field about a lonely doctor tending to the mostly alcoholic herders of the steppes. The sky is as big as in any John Ford western and the space between people is equally vast.

Former CT film reviewer Graeme Tuckett’s much-heralded documentary about Barry Barclay, The Camera on the Shore, is a moving and heartfelt portrait of a great New Zealand artist but occasionally hints at some stories that could have been illuminated further. Essential nonetheless.

My favourite two of all the previews offered this year are the two least likely: Serbis is day in the life of a run-down adult picture theatre in Manila and the family that lives there and runs the joint — Completely disarming – and Daytime Drinking is a small but perfectly formed story of another kind of male friendship – the completely unreliable kind. Jilted student Hiuk-jin is persuaded by drunken buddies to go on a road trip to the country but he is the only one who turns up athe bus station the next morning. He goes on alone, getting some spectacularly bad advice from the people he meets, much of it involving more drinking. A superbly satisfying ending completes the deal. Director/writer/producer/photographer/editor Young-Seok Noh looks like he could be the next Steven Soderbergh – a quintuple-threat to watch.

Finally a small disappointment: as a fan of Ramin Bahrani’s Man Push Cart (inexplicably not selected for the 2006 Festival) I was looking forward to seeing his acclaimed new film Goodbye Solo. In it, a mysterious older man books a two week taxi ride from a Senegalese driver. Sadly for me the Festival’s only DVD copy failed with no chance of replacement so it looks like I’m going to have to book for something after all.