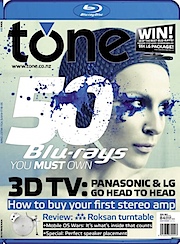 Of Tone Magazine’s 50 “must own” blu-rays 13 are not actu­ally avail­able in New Zealand leg­ally, or won’t play on NZ pur­chased play­ers due to region cod­ing. Which is a bit of a waste of time, don’t you think? They also man­age to spell Criterion incor­rectly right the way through art­icle which adds insult to injury.

After the jump, the list (the art­icle itself is not online):

So, of the 50 blu-rays that Tone Magazine say you must own, one does­n’t exist yet, two haven’t been released yet, ten you can only watch if you have a very expens­ive region-free blu-ray play­er and one more you can­’t get through nor­mal retail channels.

I’m sav­ing up for the Oppo uni­ver­sal play­er as I cer­tainly do want to take advant­age of all those Criterion discs at least but the art­icle demon­strates a) the paucity of loc­al releases so far and b) a very poor effort on the part of Tone.

And any­one who rates Ratatouille over WALL•E must be some kind of moron.

Update 24 Aug 2010: Reader BrynG points out in the com­ments that the European region coded blu-rays are com­pat­ible with New Zealand but the discs them­selves still require import­ing. My wider point remains, though. No one should be recom­mend­ing Criterion blu-rays to unsus­pect­ing New Zealand consumers.

Update 26 Aug 2010: Gary Steel at Witchdoctor.co.nz (“New Zealand’s tech­no­logy author­ity”) has kindly linked to this blog with some com­ments of his own. I won­der if he is the same Gary Steel who used to edit Tone Magazine.