I man­aged to fit in a couple of appear­ances on Radio New Zealand National in the busy late-December period. 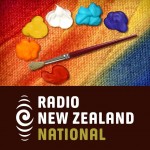 Firstly, The Listener’s Helene wong and I joined Simon Morris on the Arts on Sunday for a chat about the state of New Zealand cinema in 2013 promp­ted by the recent New Zealand Film Awards (or “Moas”).

Then, just before every­one broke for the Christmas break I paid Kathryn Ryan a vis­it at Nine to Noon
to dis­cuss my high­lights of the year and Peter Jackson’s The Hobbit: The Desolation of Smaug.