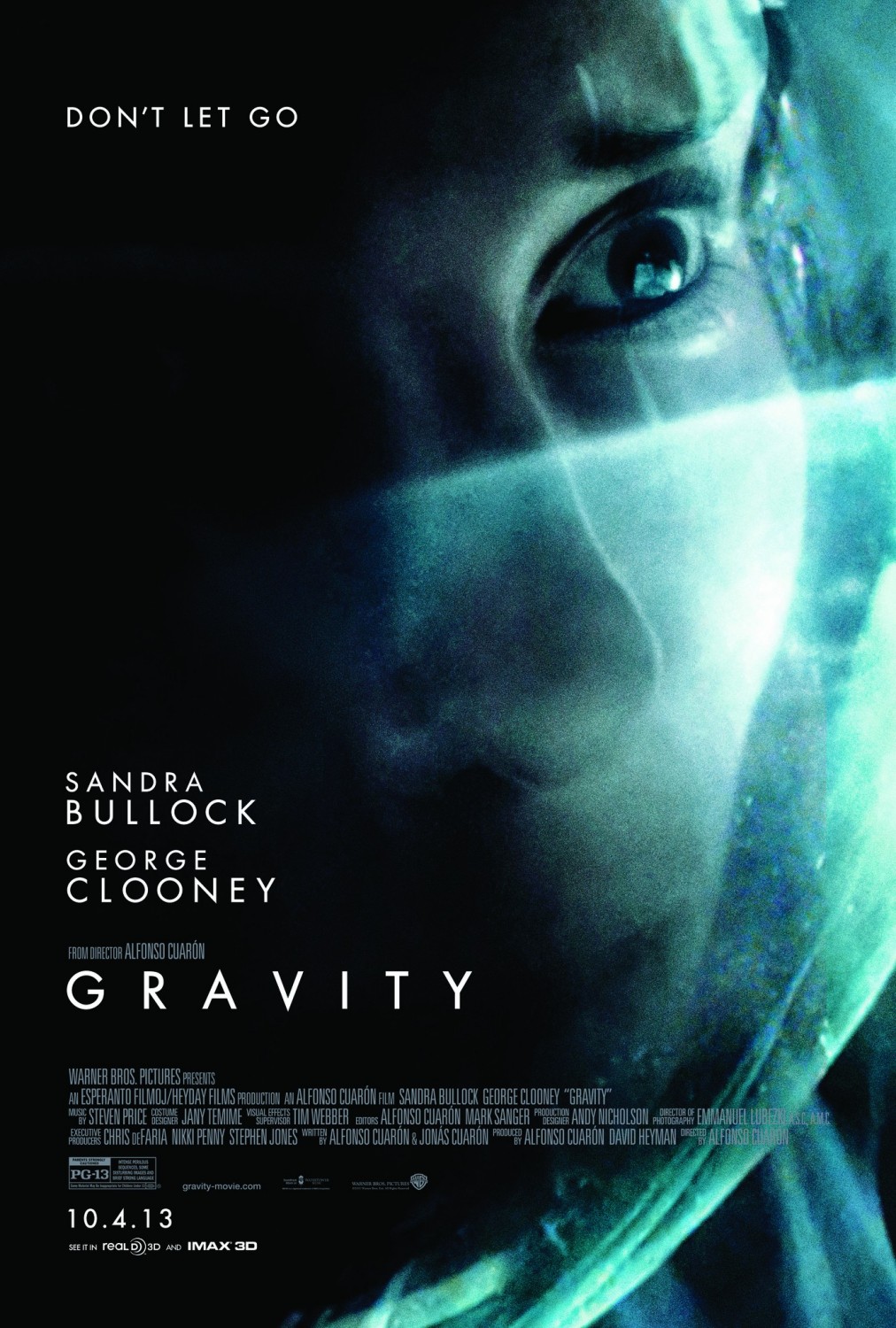 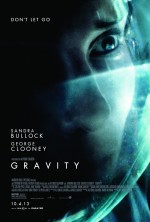 Is Gravity the first really new film of the 21st Century? I haz­ard it may be. It is cer­tainly the first to har­ness the bleed­ing edge of the cur­rent tech­no­lo­gies (per­form­ance cap­ture, 3D, soph­ist­ic­ated robot­ic cam­era rigs) to serve a story that could only really exist in this form. Sure, once his ears had stopped bleed­ing Georges Meliés would totally recog­nise what dir­ect­or Alfonso Cuarón and his screen­writer part­ner (and son) Jonás are doing here, but he would be the first to put his hand up to say that he would­n’t have been able to do it. Same for Kubrick, I suspect.

During a routine shuttle mis­sion high above the Earth, astro­nauts Sandy Bullock and George Clooney are strug­gling to make some adjust­ments to the Hubble tele­scope when Houston (a nicely cast Ed Harris) warns them of some incom­ing debris. A Russian spy satel­lite has been des­troyed by its own­ers caus­ing a chain reac­tion as the little bug­gers kick-off all over the place. Tiny frag­ments of satel­lite travel at leth­al speeds on roughly the same orbit and our her­oes have to get to safety before they risk being vaporised.

Which they don’t man­age – that’s roughly the first ten minutes. The rest of the film is them try­ing to get back home with no shuttle, no ISS and no NASA, just the two of them float­ing hun­dreds of miles above a docile look­ing plan­et and the prom­ise of a Russian (or maybe a Chinese) ship that can get them home.

What Cuarón has man­aged here – through a com­bin­a­tion of exquis­ite sound design, near-perfect VFX and his trade­mark long, flu­id takes – is to make you believe. The debates about the sci­ence have been going back and forth for a while but the film feels authen­t­ic which is the most import­ant thing, right? A simple story, made to look simple with the aid of about a hun­dred mil­lion dol­lars, Gravity is a new bench­mark for cinema entertainment. 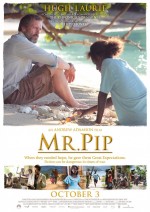 Andrew Adamson’s Mr. Pip, is much more earth­bound. In a remote Bougainville vil­lage, isol­ated by a rebel­lion over self-determination and min­er­al rights, the only remain­ing white man (Hugh Laurie) is pre­vailed upon to teach the vil­lage chil­dren. The only tools at his com­mand appear to be a gentle and unas­sum­ing nature and a copy of Dickens’ Great Expectations which he reads to the class every day.

The hor­rors of war can­’t be held at bay for long, though, and Laurie’s sharpest pupil, Matilda (Xzannjah Matsi) and her fam­ily are caught up in the viol­ence and retri­bu­tion – with only the mild-mannered teach­er and his book for pro­tec­tion. I sus­pect this is actu­ally two films – one for people who read Lloyd Jones’ book and one for those of who haven’t. Not bet­ter or worse, just dif­fer­ent. I was taken by sur­prise by the turns the story took, con­front­ing turns for sure but ulti­mately neces­sary. Adamson has craf­ted the story so that it provides legit­im­ate emo­tion­al heft rather than the manip­u­lated heart-string tug­ging we usu­ally get and Laurie is just bril­liant, con­stantly dial­ling down and mak­ing us look more closely. 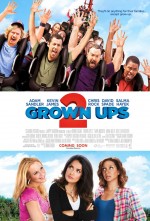 For per­sist­ent crimes against cinema, humour and – pos­sibly even human­ity itself – Dennis Dugan , j’ac­cuse! A job­bing act­or in Hollywood since the early ’70s, Dugan turned to dir­ect­ing with the dumb com­edy Problem Child in 1990 and has been spe­cial­ising in fart jokes and juven­ile com­edy ever since. In 1996 he hitched his talent-free wag­on to hot young com­ic Adam Sandler with Happy Gilmore and the two of them have been all-but insep­ar­able ever since.

Big Daddy, You Don’t Mess With the Zohan, I Now Pronounce You Chuck & Larry, Grown Ups, Just Go With It and Jack and Jill are the res­ult of their team­work (and when he can­’t work with Sandler he’ll even stoop to Rob Schneider) but the new low in their rela­tion­ship is the unfeas­ibly lazy Grown Ups 2 which looks as if no one can be bothered to so much as keep the cam­era straight on the tri­pod. The fact that this man has a suc­cess­ful career in Hollywood only con­firms that there truly is no God. 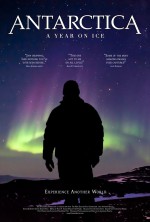 Evidence in sup­port of a deity’s pres­ence can be found in abund­ance in Anthony Powell’s stu­pendous feat of homemade film­mak­ing Antarctica: A Year on Ice. The screen­ing I atten­ded at the New Zealand Film Festival was tran­scend­ent and I’m thrilled to report that selec­ted cinemas are now play­ing it. Awe-inspiring, jaw-dropping. 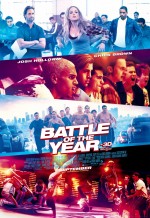 I did­n’t have to get too far behind on these reviews (for which I am in a con­tinu­ous state of abject apo­logy, by the way) for Battle of the Year 3D to have dis­ap­peared from screens. In case you are ever temp­ted to pick it up at your loc­al video store* I can advise you that on a sci­entif­ic 3D-dance-battle-movie scale it rates some­where between StreetDance 3D (the cock­erknee one) and Step Up 4 (the “Occupy Miami” one). A drunk bas­ket­ball coach (and former hip-hop dan­cer) is brought out of retire­ment to coach a US “dream team” of dan­cers at the World Champs in France, Europe. The sports-movie clichés come thick and fast, the act­ing is noth­ing to write home about (even from the sup­posedly ‘prop­er’ act­ors) but the final routines play out just fine – that’s what people are there for anyway. 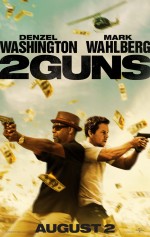 Finally, also already gone to that great video-on-demand web­site in the sky, 2 Guns reunites Mark Wahlberg with dir­ect­or Baltasar Kormakúr who made the snoozy Contraband for him back in 2012. It also fea­tures Denzel Washington whose cha­risma stirs a little bit of effort from Wahlberg in a buddy action flick remin­is­cent of 80s clas­sics like Lethal Weapon and 48 Hours. Kormakúr can make very cool films when he’s work­ing in his nat­ive Iceland but is tak­ing time to find his voice in Hollywood. 2 Guns is a step in the right dir­ec­tion for him, even if it’s just anoth­er day at the office for Wahlberg and Washington.

*Ed’s note: Younger read­ers should ask their par­ents the mean­ing of the term “loc­al video store”.